Why is Conservative Columnist and Gay Icon George Will Gay-Baiting John McCain? 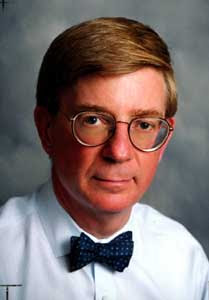 Readers, why on Earth is emotive conservative thinker and typer George Will—who is also, not incidentally, an icon to confused gays everywhere—gay-baiting John McCain in his most recent Washington Post column? Witness the homophobic linguistix:

Channeling his inner Queen of Hearts, John McCain furiously, and apparently without even looking around at facts, said Chris Cox, chairman of the Securities and Exchange Commission, should be decapitated.

Honestly, what's going on here, George? First you call John McCain a queen and then you say something about Sissy McCain cutting off the head of some dude's cocks. Worst of all, you use the word "decapitated", which everyone knows is DC street lingo for oral sex. Is this what political discourse has come to in this country? (Or would you rather I said c*ntry?)

You're disgusting, George.
Posted by Tim Anderson at 7:22 PM

Email ThisBlogThis!Share to TwitterShare to FacebookShare to Pinterest
Labels: race 08