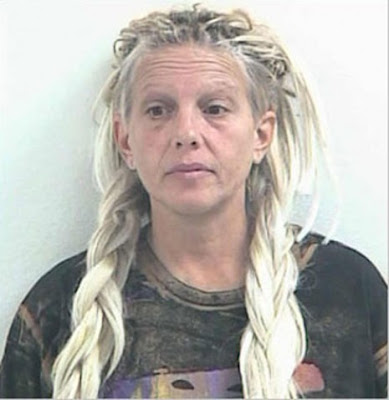 I was reading that new book about MTV recently (the same one I referenced a few weeks back), and it was pretty a pretty fun read, with lots of dirt and a few stomach-turning moments. Everyone was such a drunk slut in the '80s. So gross and unfair. Anyway, one part in particular jumped out at me, because I'd been wondering whatever happened to Dale Bozzio, the lead singer of Missing Persons. Beth McCarthy, an MTV producer, explains on page 134:

Mark Goodman asked me to go to his dressing room to get some notes for him--I was the assistant to the line producer, so I would do errands for the VJs. I ran to his dressing room, opened the door, and, um, Les was getting a blow job from Dale Bozzio. I saw this out of the corner of my eye and closed the door very quickly.

Wait a minute, wait a minute. Dale Bozzio? Giving a blow job to the executive vice president for programming for MTV? That doesn't sound like her. Why would she do that? To get her videos played, sure, but why else? Anyway, Dale doesn't seem like the type of trollop that would suck on a dick to get ahead. I mean, look at her, does she look like the type a gal who would compromise her integrity just for the sake of some modest airplay on an upcoming cable network? 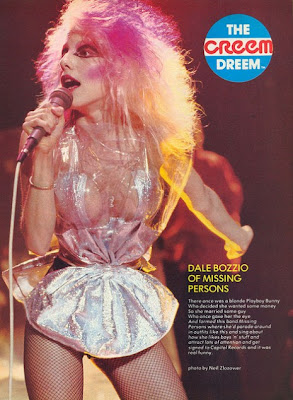 Okay, yeah she does. But how about we give Dale an opportunity defend herself on page 135 against this scurrilous rumor, shall we? Go ahead, Dale:

I don't have any comment. I appreciate your time, but I'm not interested in being interviewed, okay? I'd rather have nothing to say.

Okay, yeah, she did it. But who among us didn't give a blow job in the 80s for a little bit of airplay? We all did this. Poor Dale. I feel for her, this being the only thing she's remembered for in a 600-page book about MTV. But at least this passage led me to the Google machine to look her up. I hoped she was doing something life affirming and worthwhile, like growing medical marijuana or appearing in dinner theater productions of The Rocky Horror Picture Show. I was in for a bit of a letdown.

Oh how the mighty have gotten arrested. Yes, Dale was arrested for animal cruelty in 2008, an event that led to the above mugshot being taken of our dear Dale. She was convicted in 2009. So basically, Dale Bozzio has become a crazy cat lady. Except worse: she's a crazy cat lady who neglects her cats. WTF? This is a like an 80s pop singer who doesn't give blow jobs.

Anyway, this seems like as good a time as any to remember Dale Bozzio in better days, so watch this video, won't you?

A "friend" of Dale promised to look after her cats while she attended to her sick mother. The "friend" never showed so the cats starved & Dale was held responsible. Please do some research!

I've always said Lady Gaga is this generation's Dale Bozzio. I mean, LOOK at her! She looks like her and tries to sound like her, but Missing Person's songs were better and Dale's sound was more unique!

Wish she woulda given ME a BJ...

If you have 14 cats, then you are ipso facto a crazy cat lady. Glad to hear that she may not have neglected them though...

I was in college when Missing Persons came out. Loved the music... and Dale. By the way, I recall she did a "spread" for Hustler Magazine back then too. The BJ doesn't shock me.

I'd give her a blowout😍

I've always loved her singing voice, her fashion, her hair, the way she performed on stage, her slim body and her pretty face. She was way ahead of the times. I loved her edginess. She was the female side of Freddy Mercury from Queen

Yes I agree. I actually think Lady Gaga got a lot of her entertainer Persona from Dale's prior performance efforts.

Yes I agree. I think Lady Gaga got a lot of her ideas and inspiration from Dale.

Regardless of all this negative crap about her, she was and is great and I loved growing up with her music and myself and all my friends love her forever

Hey there, I just saw Dale & Missing Persons rock a packed house last night in Huntington Beach, CA. She is still great! Her band blew minds as well. Bassist Prescott Niles (from The Knack) is a monster player. They brought the house down!

'went to check Missing Persons still with Dale Bozzio at the Canyon Club in Agoura a few month back and they were on fire ! Dale still has it big time and the band is unbelievably amazing !!! I was in shock !

I'm glad she is still performing. The band was awesome. Always wanted to do my hair like hers. Rock out cat lady!

I have just been told Dale was found homeles sand toothles sroaming L A streets , please confirm , thank you ; ))

Honestly, the takeaway from that photo is that she looks great for her age, even in a mugshot.

Dale was the 80s greatest frontwoman. She was also better live than on record. The best performance at the 83 Us Festival was "Walking in LA." She's a legend.

I seriously doubt the beej story. I understand why some no-name exec would make the claim, though. BJs were obviously not necessary for girls who looked like Dale to get on MTV.

Sheesh, sounds like you've got some sort of weird personal grudge against the woman. I wonder how you'd come out looking if some random jerk on the internet decided to put your life under the spotlight and then take a dump all over it.

Dam I love dale so much grew up with her and Terry most definitely the best drummer on the planet and she had the voice and face of angel and let's not forget about her gorgeous body yummiest woman EVER!!!