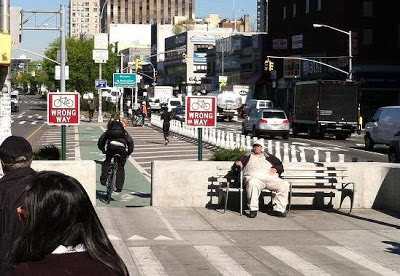 Everyone hates everyone in New York at one time or another, often for good reason. Because in this sea of selfish humanity, let’s face it, there’s plenty to hate: hipsters with their idiotic carnie wardrobes and artisanal organic eyeglass frames; tourists with their snail’s pace and their girth; jerkwads who insist on pushing onto a subway train as soon as the doors open without first letting folks off; cabbies who don't want to go to Brooklyn; hosts/hostesses at nice restaurants who treat you like the trash you are; hot, well-dressed dynamos with their great clothes, luscious hair, chiseled features, smoldering sex appeal, fat wallets, and shiny shoes; rats; hipster rats with their fedoras and Animal Collective T-shirts. They are all the worst. But do you know who’s even worse than the worst? Bikers.


Everyone hates bikers. HATES them. I know because I am one. I bike every day from Greenpoint, Brooklyn to my office a few blocks north of the Empire State Building. As a biker, you can feel the seething, sizzling hatred coming at you from all sides—from pedestrians, minivan drivers, school children, nannies, French bulldogs, pigeons, hipster pigeons, and, especially, cabbies. More than once I’ve seen a taxi intentionally swerve to scare a cyclist. Once I was honked at and loudly scolded by an old bat in an Escalade for not staying in the bike lane on Avenue A—even though the bike lane was currently blocked due to construction, so I had no choice in the matter. Another time I barely missed getting doored by a guy in a parked car—and I know he saw me because I made eye contact with him in his sideview mirror before he opened his door (and saw him laughing when I pulled off to the side and turned around). It’s not totally rational, this hatred of bikers. But it’s there and it’s kind of breathtaking.

But here’s the thing: this hatred of bikers isn't totally irrational, either. A lot of the time, I hate bicyclists, too. They are constantly and brazenly doing idiotic, life-threatening, and completely unnecessary things—like, say, going the wrong way when getting off the Manhattan side of the Williamsburg Bridge instead of just being reasonable and waiting for the light (see the photos). See, that part of the bridge was redesigned about a year ago to encourage bikes to slow down and wait for the signal before entering traffic or crossing over to the north side of Delancey Street—too many of us, including myself, were deciding they couldn’t wait and that they were just going to elegantly slip into traffic so they wouldn’t have to stop. Most of the time this was fine—you could judge that a gap between cars was emerging and go for it. But I’m sure sometimes it was gnarly, and people got hurt. Hence the redesign, with a much narrower point of entry onto the street and a steep decline to encourage slower speeds. The city also put up not just one but two “WRONG WAY” signs so that folks would know that, though there was another narrow passageway one could take to avoid having to wait for the light, one should not take that path because it is reserved for folks coming from the other direction and that if one did do that, one was being kind of an asshole.

Yet bikers continually just ignore the signs and do whatever the fuck they want because fuck it. (Should the city have put up a third sign? One saying "STOP being an asshole"?) Now, I’m not typically a scold, and some rules for bikers are dumb—I don’t tend to come to a full stop at every stoplight on any old one-way street, for example. But some rules aren’t. And while, sure, we can all be dumb assholes at times--like when we get pissed on the bridge when we are overtaken on the uphill climb by an elementary schooler so we make it our one goal in life to overtake that little f*cker if it kills us--eat my dust, pipsqueak! Who among us hasn't done that? But still, on balance, one's behavior on a city bicycle must reflect one's sanity and good judgment if one is not to be wished dead by one's fellow cityzens.

And it’s not just the constant breaking of clearly expressed—and, again, reasonable—rules that makes bikers so loathsome to their fellow New Yorkers. It’s also the plain-Jane, workaday reckless douchiness of the way folks ride. I take First Avenue up to Twenty-Ninth Street, and, sadly, the bike lane is on the left—this is the east side, which means that the vast majority of folks are turning left, making for a constant clusterfuck at every intersection. Yet so many of my fellow cyclists bike as if they’re in a race to the damn Apple Store. It’s not a fucking race, nerds. Bikers must constantly slow down, swerve out of the way to avoid parked cars in the bike lane or left-turners crowding it, and, yes, sometimes stop at lights so that they don’t go splat. You are not on the West Side bike path and you are not going to win a prize if you get to work five minutes earlier, probably. You are in freaking New York traffic. I’m all for going a decent speed, and there are definitely slowpokes who need to get the lead out sometimes (though I cut them some slack because sometimes they’re old and sometimes they’re probably just newbies at city bike commuting), but there’s absolutely no need for the kinds of speeds I see bikers going on this street every day—especially since I often end up reuniting with folks who whipped past me ten blocks ago at the light at Fourteenth or Twenty-Third, because that’s just how it goes. The hare and the tortoise, together again! (The hare and the tortoise will probably get to their jobs within minutes of each other.)


In conclusion, I’ll just say that one morning a few years ago I was stopping at a light that had just turned red at Houston Street and Avenue A, and a cyclist whipped past me on the right to speed across the (massive) intersection. He managed to clear it without dying and then, on the opposite side of the street, ran smack into the back of a delivery truck like a cartoon character. He fell off his bike and got the stink eye from the delivery guy as he was getting out of the vehicle. Once the biker got up and I saw that he was okay, I was able to admit to myself that that was the most satisfying thing I’d seen since Akasha got eliminated in the first season of RuPaul’s Drag Race.

Be nice out there. Practice your "not being an asshole" skills. And as RuPaul herself says, don't f*ck it up. Because guess what: bikeshare stations are imminent, so the number of idiots on bikes is only going to increase...

UPDATE
This little blog essay was apropos! Looks like the city is moving to crack down on bikers being assholes by stationing guards on high-traffic bridges and bike paths with signs saying "Just F**king Stop and Wait a Second, Would You?". Look here and here.
Posted by Tim Anderson at 4:23 PM 1 comment: