Lessons from the Internet: Fans of Canadian Ice Skaters Are Fragile 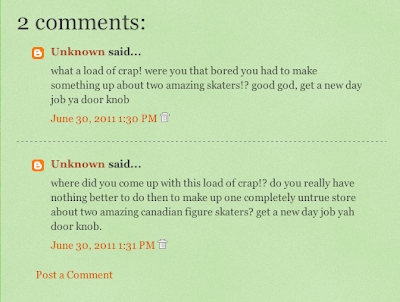 The Internet is a wonderful place, full of fascinating people to meet and things to see that you would otherwise have no interest in knowing about. I never realized I needed the sweet embrace of Lolcats, for example, until there they were on my screen, lol-ing. You know one thing that the Internet is also full of? That's right: sensitive, mean idiots off their meds who love to type things twice in a slightly different fashion into their computer machines.

As none of you may recall, back in April I had some fun with a picture of Canadian ice skater Meagan Duhamel elbowing her skating partner in the face, because why not, am I right? Life is boring! Now, months later, some poor fraggle going by the name "unknown" has found this blog entry and is SO PISSED about it. Why? Because Meagan Duhamel is an amazing skater and I can't believe you would make something up about a famous person and put it on the Internet!

So now I'm being encouraged by a random person on earth to get a new job because this one is clearly not working out, due to my being a doorknob. Salient point. Doorknobs can't blog.
Posted by Tim Anderson at 4:16 PM 3 comments:

Email ThisBlogThis!Share to TwitterShare to FacebookShare to Pinterest
Labels: idiots, lessons from the internet 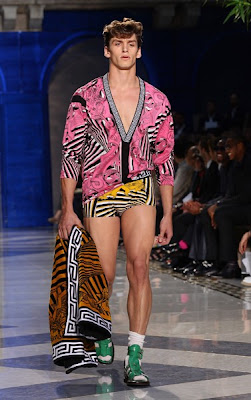 There's nothing more instructional than a men's summerwear catwalk pose-a-thon. That's why the Men's Fashion Week extravaganza in Milan was the most educational event to take place in the world since Live Aid. It's extremely important for us hot dudes to know what to wear to Brighton Beach, where we go every summer Sunday to do laps in the ice-cold Absolut swimming pool. And I don't know about you guys, but I wouldn't be caught dead NOT wearing the above collection of epileptic and ball-hugging pattern explosions. Why? Because stripes are slimming, especially when they're spastically shooting out in every possible direction: they confuse people into thinking you're thin, hooray!

There's a word for this ensemble, but that word is Russian and I don't know how to type/pronounce it. But it really sums things up quite nicely.

In conclusion, in the future all men will look like they were mauled by a gaggle of bitchy gay zebras.
Posted by Tim Anderson at 12:14 PM No comments: 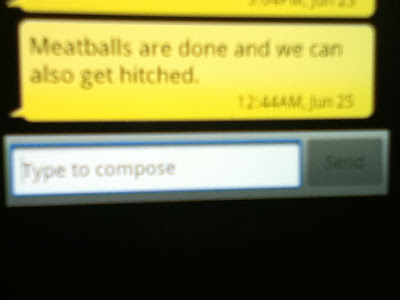 On Friday I was at band rehearsal (that's what you have to call it if you're in a band and you're 38) and Jimmy was at home doing what he loves: making dinner. After laying down a powerful viola track, my phone buzzed with the above text message from Jimmy.

I was so surprised and deeply deeply moved, after 14 years of being together. Because I thought we were having pizza.
Posted by Tim Anderson at 3:26 AM 3 comments:

Come On, New York, Stiffen Up and Make the Gays Happy

My friend Taylor and I were at the Guitar Center on 14th Street on Sunday to get a paisley pink viola chin rest (they didn't have any!) and we were trying to decide where to go next to search for one (Taco Bell?) when we heard the approaching cacophony of a demonstration, yay!

Turns out it was a pro-gay marriage stomp, which made me think: isn't there some sort of vote happening up in Albany regarding same sex marriage or something, and isn't it really close to passing?

Shootin' It, In Which Tim and Jimmy Discuss the Issues of Our Times. Tonight, Gay Marriage in New York

Tim: Hey, if New York legalizes gay marriage should we get married?
Jimmy: No, I'll ruin your credit.

Guess that settles it!
Posted by Tim Anderson at 2:08 AM 3 comments:

Email ThisBlogThis!Share to TwitterShare to FacebookShare to Pinterest
Labels: gay, shootin' it

We all know that Puerto Ricans get a kick out of being Puerto Ricans. Who wouldn't? If I looked as good in a pair of saggy jeans as the dude in the above video does (my camera phone couldn't take its eyes off of him), I'd be throwing a parade every day, and I would certainly never wear a shirt.

On Sunday my bandmate Taylor and I were walking a friend to the Knickerbocker JMZ stop in Bushwick and also going to get beer, Joose, Tussin, shower caps, Oreos, poppers, and pills so we could practice properly, and holy moly it was loud outside. Down on Knickerbocker Ave., there were whistles, yelpings, flags, half-nakedness, horn honking, and other things signifying robust revelry. It wasn't really a parade, per se, but folks were sometimes walking in formation down the middle of the street, so maybe that counts?

I was a little disappointed that there were no dudes dancing on floats in their speedos, because isn't that what happens every time a bunch of loud folks gather together somewhere in NYC?

Below is an adorable short film I made called "Maracas," in which a Puerto Rican gentleman faces a difficult choice: continue blissfully playing his maracas or answer his annoying neighbor's persistent questions. Because he can't do both at the same time, much as he'd like to.

This film will win the short-subject documentary prize at next year's Daytime Emmys. 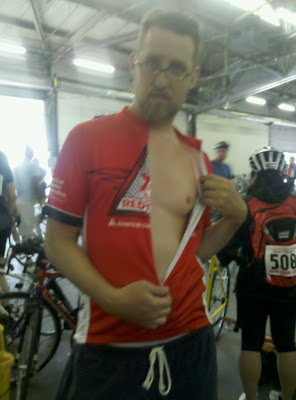 There aren't many days when being diabetic gets you a free sexy spandex bicyclist jersey, but last Sunday was one of those days, because it was the Tour de Cure, hooray! The Tour de Cure is an annual (?) bike ride through NYC (and other cities?) that raises money for diabetes research, which is very important these days because almost 99% of this fat nation has type 2 diabetes by the time they are 13. I'm one of the classy type 1 diabetics cursed with diseased genes, so I was never a big fatty who ate cheeseburgers and Ben and Jerry's for breakfast. No, no, my diagnosis was just blind luck, hitting me like a falling piano when I was just a skinny dumb 15-year-old.

But I'm a team player! And I love riding my bike! So along with my friends Geetha and Alyson I decided to raise some cash for what momma calls "dah-bee-tease."

Even though I was totally psyched about my free red jersey, I was a little bummed that I would have to ride around NYC for hours with the message "I Ride With Diabetes!" plastered across my back. Because what am I, 3 years old? 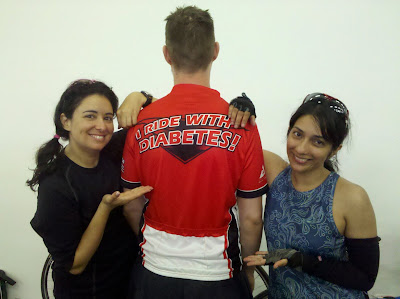 It was a beautiful day to ride, and we had 30 miles to cover, so things got started early, with some ceremonial screeching, about America.

We queued up for the big start, taking our place among all the other riders. 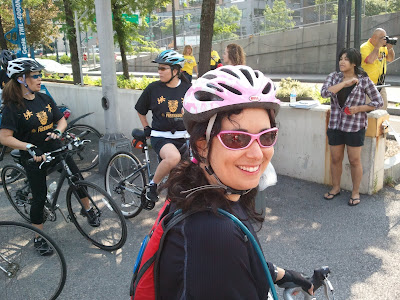 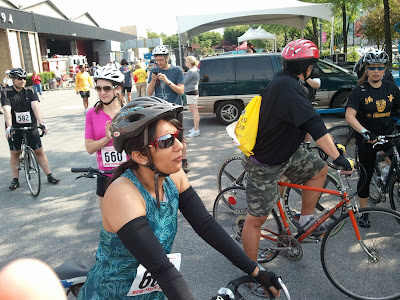 Then we were off, riding up the west-side bike path and north toward Harlem and Inwood, both of which should be renamed "Bunch of Danged Hills." And did you know that New Yorkers--drivers and pedestrians alike--have a visceral hatred of bicyclists, even ones wearing sexy red jerseys and riding for f-ing charity? The sneering animosity was palpable, and quite off-putting. Sure, I bike to work every day from Brooklyn to the west side of Manhattan and somehow avoid being killed by careless cabbies and mean-spirited bitches in Escalades constantly, but for some reason I figured there would be at least a modicum of good will on offer for those RIDING WITH DIABETES! But no, there was very little of that to be had, because of seething hatred and, sometimes, homicidal mania.

Anyway, because of all those dang hills, I needed a snack to repair a blood sugar plunge before we even reached the first break location. Here I am enjoying the hell out of a Snickers bar. 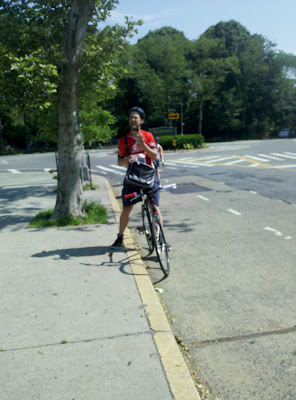 The cue sheet for the ride was long and was also on paper, not on a app like the Jetsons used, so we had to tape it to our bikes like the Waltons always did in order to lessen the likelihood of dying while figuring out where to go. (This was still very likely!) 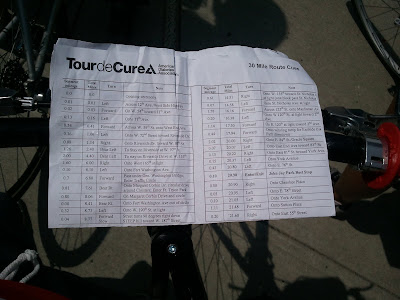 And a short 5 1/2 hours later, in I rolled to the finish line, triumphant and ready for a cure to diabetes once and for all so I can realize the American dream of starting my days the way the Founding Fathers intended: with a large bowl of Peanut Butter Cap 'n Crunch and Nutella-smeared toast on the side.

Tour de Cure, yaaaay! To be honest, I raised some money but not as much as I could have because I just decided to do this five days before the ride. But you can still help me out, just go here and relieve yourself of all your money. 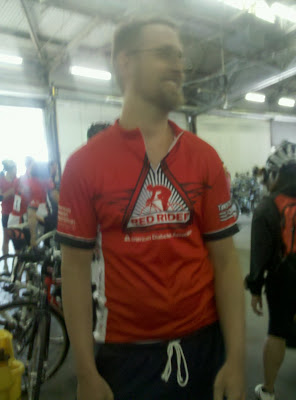 Posted by Tim Anderson at 12:32 PM No comments: