I'm pretty sure Stella is giving it two paws up.
Posted by Tim Anderson at 12:55 PM No comments:

The 21 Stages of an Insulin Attack: A Diabetic Adventure in GIFs

Do you know a type-1 diabetic? The kind that has to jab themselves all day, every day, forever, with needles? Then you need to be able to recognize when this person--be it your dealer, your mother-in-law, your office crush, or your Craigslist hookup--is having an insulin reaction. Because things can get real, and you need to be armed with the facts. One moment you might be chatting about wanting to get your hands on a Michael Sam sex tape (there's gotta be one!), the other you're wondering why the person you're speaking to is having trouble forming words or is laughing maniacally and sweating like a honey baked ham for no reason.

Your friend (dealer, mother-in-law, etc.) is in trouble, you see. Because, though he's an insulin-dependent diabetic, sometimes he may have taken too much insulin, or not eaten enough to cover the insulin he took, or exercised too much, or has been really stressed out lately. Maybe you're hanging out playing Scrabble, maybe you're in your office's supply closet, maybe he's asleep and you're there for some reason--the point is, at these times of what is called "hypoglycemia," his blood sugar will plummet to depths no human should be prepared to accept, and his body will do its best to let you know that you need to FEED HIM SUGAR NOW OMG. He won't go through all of these stages, but that all depends on you and how fast your reflexes are. (Also, how many Snickers bars you have on you.) You can learn more about the hilarious/irritating/dangerous world of low blood sugar attacks in my book Sweet Tooth, a memoir of my life as a type-1 diabetic teenager who thinks he likes dudes but knows he loves Froot Loops.

So, herewith, are the various stages of an insulin attack:

The part when he starts twitching

The part when he starts sweating

The part when he seems like he's a million miles away

The part when he becomes kind of confused

The part when he sweats some more

The part when you try to get him to just open his mouth for one freaking second so you can squeeze some cake icing up in there and he's all...

The part when you realize, oh shit, this is getting real

The part when the sweating is kind of becoming a problem

The part when the sweating is getting kind of ridiculous

The part when he's really sorry for being so much trouble

My book Sweet Tooth: A Memoir is out now from Lake Union Publishing. Buy it for all of your best frenemies.
Posted by Tim Anderson at 5:14 AM No comments: 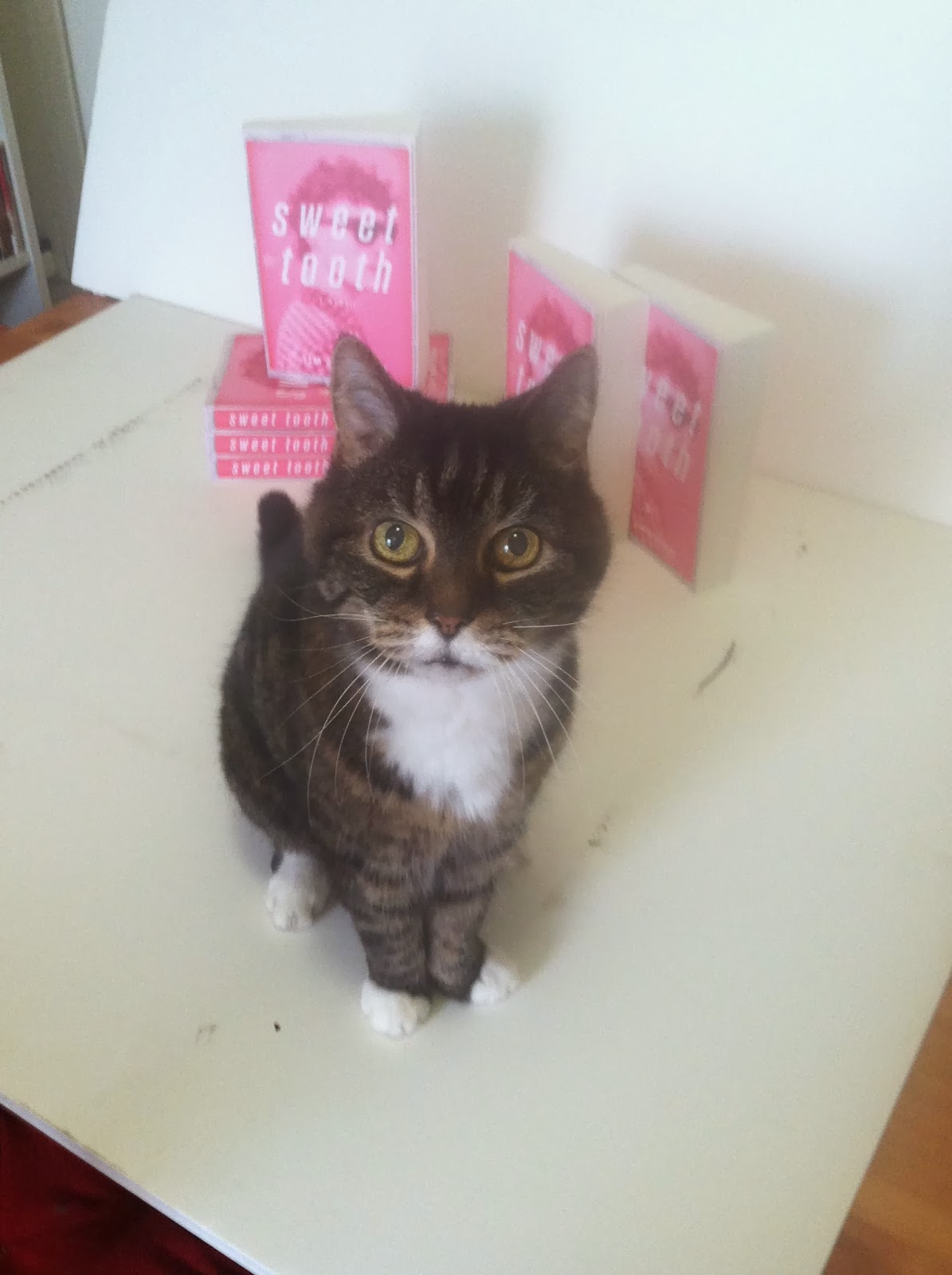 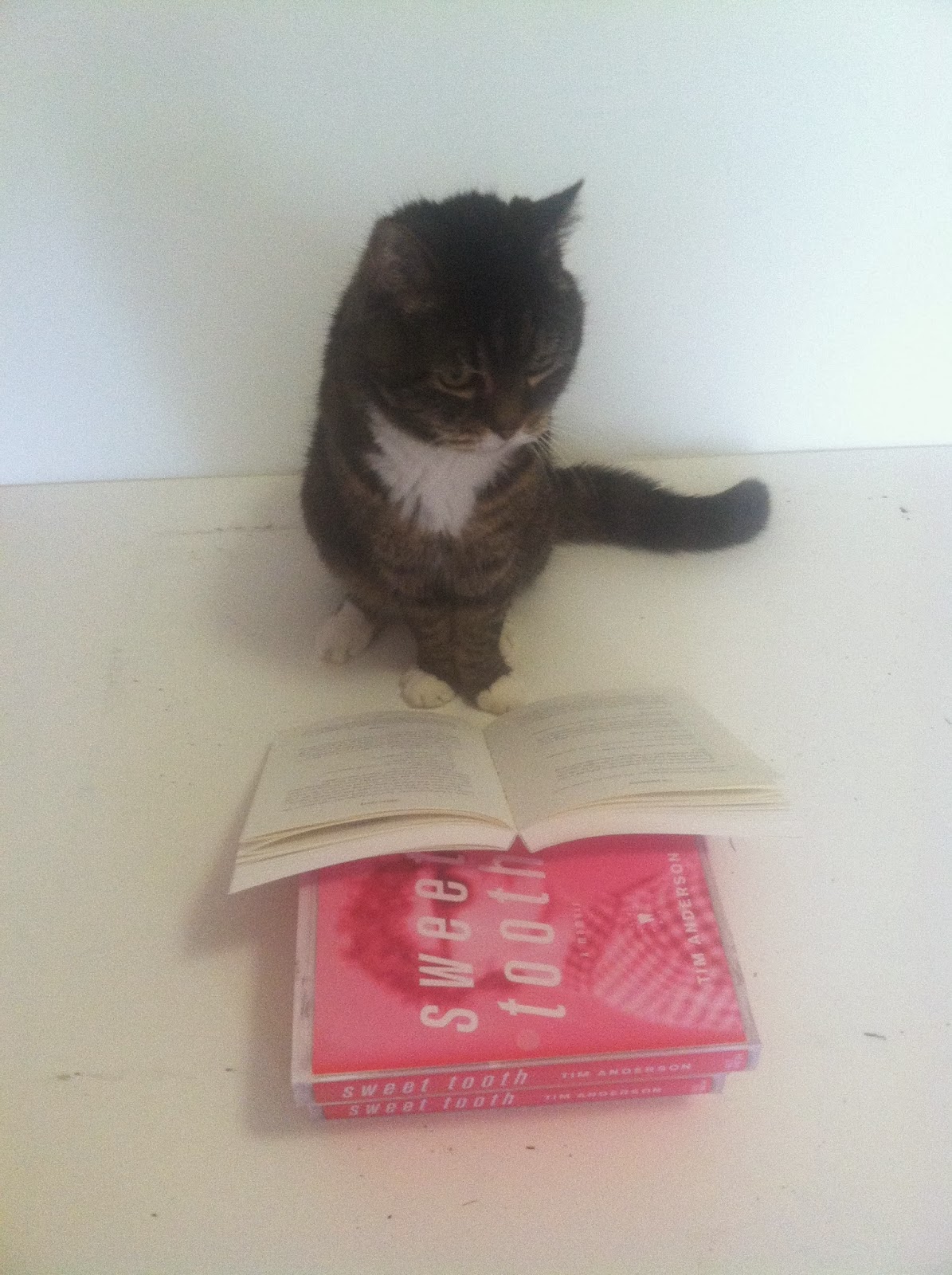 Guys, I got my copies of my new book Sweet Tooth, which chronicles my adolescence as a poor gay boy who loves sweets, and my cat Stella has already staked her claim on all of them. Jimmy said she's spent all day stacking them in different formulations. The one below is particularly poignant, as it really gets to the heart of the experience of a diabetic who loves Nutella and sometimes has low-blood-sugar episodes. 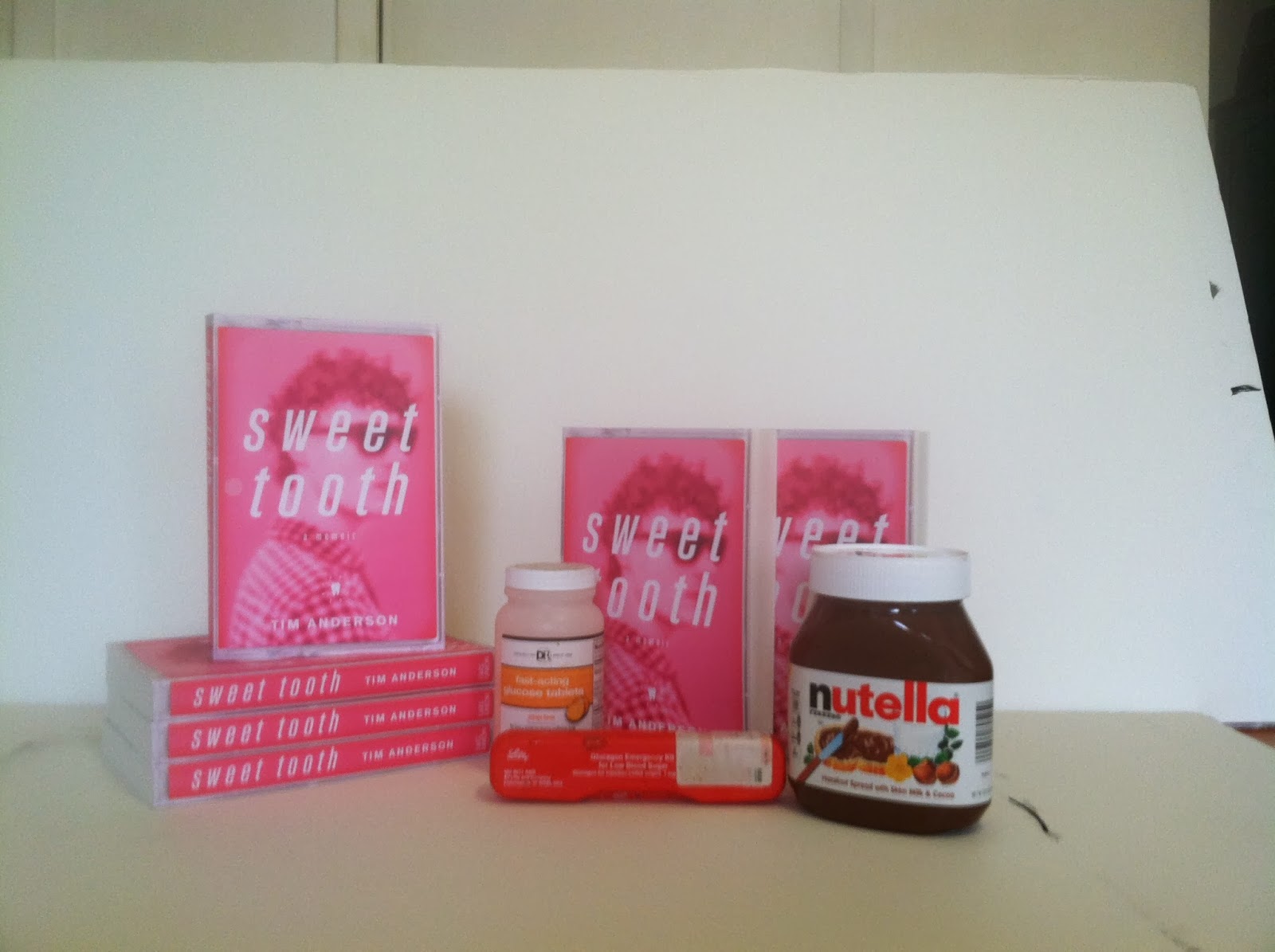 That there is a vat of God's own chocolate hazelnut spread, plus some chalky glucose tablets in case your blood sugar is low and you have absolutely nothing else around to combat it, plus a glucagon injection kit, which is as delightful as it sounds--if a poor diabetic has passed out or is unresponsive to whatever sugar you're shoving in his face, you may need to take out the glucagon and jab him with it, for freedom (and so he doesn't slip into a coma).

After doing her art project, Stella whipped out a copy and turned directly to the part about her, because she's narcissistic, like most cats.

Posted by Tim Anderson at 8:48 PM No comments: