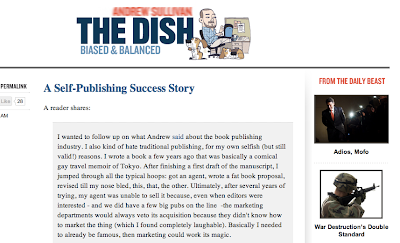 Wow, this is really quite something. I've been reading Andrew Sullivan's blog religiously for about 5 years, ever since he became the only conservative voice out there who wasn't a completely delusional nutbag. In fact, he's one of the most clear-thinking and intellectually honest writers I've ever encountered. Anyway, one of the great things about his blog is that, though it's heavily weighted towards politics, it also covers a lot of other great topics that are out there--among them religion vs. atheism, marijuana use among MANY Americans, scientific debates, and, most importantly, the Pet Shop Boys. It's all there. And one of his pet topics is how much he loathes the publishing industry. He did a video response last week to a reader who asked why he hates the publishing industry so much, which was fun. I wrote a letter to him and his team in response and yesterday they ran the letter and, even though I didn't mention the name of the book in my letter (I dropped big clues, but I didn't want to be too unseemly--it's bad to dress like a pimp when you're pimpin'), they actually found the book on Amazon and included hyperlinks for folks to buy it OMG!

Truly, truly a thrill to be on that blog. I love it dearly. It has done a lot to keep me sane over the past decade. Plus, he's as obsessed with Sarah Palin as I am.
Posted by Tim Anderson at 3:18 AM

Tim, I'm not sure if you're aware that Amazon was going to do this or not. I found out about your book via an Amazon Kindle Fire Weekend Deals e-mail this morning. Sounded interesting, so I bought it. I don't think you can beat Amazon for the power of just sending out an e-mail and getting your book in the faces of people like me who just love to read.

Hello Tim! I wrote a novel settled in Tokyo, and publishers gave me the same response as they gave you: they don't know how to do marketing on it. -.-" !?