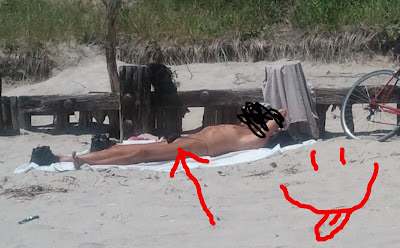 Well, it was the first official weekend of summer, ladies and gentleman, and we all know what that means: that's right, it was time for a two-hour bike ride to the one and only Ball Sack Beach at Fort Tilden. The water was delightfully freezing, the weather was spectacular, the hipster titties were swinging, and the ball sack sacks were just everywhere. One would have thought that, this being Pride weekend in NYC, all the best ball sack sacks would have been in Manhattan on some hilarious float made out of pink and purple bottles of lube, but no, quite a few of them were catching some rays in Far Rockaway, just stone cold ball sack cradlin'.

The most exquisite ball sack sack I saw, though, was that belonging to the above gentleman. It was a sight to behold. From its best angles, it seemed not just to cradle his actual sack luxuriously in its silky bed--it actually seemed to inflate it to its maximum capacity, giving it the appearance of an accent pillow meant for a baby's crib. I wish I'd just thrown away all caution and taken a picture of him when he was awake and brazenly laying on the beach, leaning on his elbows, one bent leg up, the other bent leg stretching toward the sand and allowing his sack to fully receive the sun's hella warm kisses. It was an immaculate/disgusting display. Click that thing up top to make it bigger and then hide yourself in the bathroom and weep that you missed seeing it face to ball sack sack.
Posted by Tim Anderson at 2:04 AM

Thanks for the laugh! Always appreciate a good crotch shot.

hope he used a good sun block, nothing worse than burnt balls