Get Ready to Roll Your Eyes 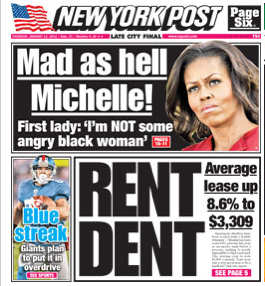 Oh, Jesus, New York Post, you really are the worst, aren't you? When I saw this headline today I just about choked on my own tongue. Are you kidding me?

As some of you may know, there's a new book out called The Obamas that dishes some dirt on the supposed friction between Michelle Obama and members of the administration, particularly hot rod Rahm Emmanuel. (It is extremely important and relevant to note here that this book currently sits a mere four slots above my own book about the Obamas, Tune in Tokyo, on Amazon's Kindle nonfiction top 100 list OMG.) The White House has responded to the headlines this book has generated by downplaying the drama, and part of this effort was Michelle Obama doing a sit-down interview with, for some reason, Oprah's best friend Gayle King. During this interview, our FLOTUS said this (copied directly from the Post):

“But that’s been an image that people have tried to paint of me since, you know, the day Barack announced that I’m some angry, black woman.”

This is true! Remember the legend of the Michelle Obama "whitey" videotape that every right-wing reptile was dying to get their hands on? (And by the way, like I said, I copied and pasted the above quotation directly from the Post's website. Notice how they cheekily left out the comma that should go after the word announced so basically it looks like she's saying that Barack announced that Michelle is some angry black woman. Nice touch, guys.)

Anyway, so of course the media are going to cover this response of hers, and unfortunately the New York Post is classified as "the media," so of course we were bound to see something about this on the famously right-wing daily's front page this morning. And what did the bilious baboons over at the Post decide was the best headline for this story? That's right: Mad as Hell Michelle!

I bet the Post newsroom smells like a high school cafeteria.
Posted by Tim Anderson at 8:05 PM