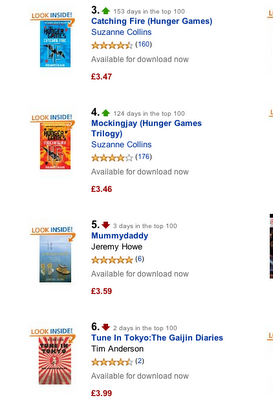 Wow, this was a surprise for the ages. I'm big in England! Or rather, I was fleetingly big in England last Thursday. By the time I found out about it on Friday I was down to #6 and I've been dropping ever since. (Right now I'm #85.) Still, being #1 on this list means I was, for a short time, ahead of Hunger Games! What is the world coming to? I don't even kill any children with a bow and arrow in my book. (Next one, maybe?)

How did it happen? Apparently TiT was a "Daily Deal" or something last week, chosen by the Kindle editors. So it was discounted somewhat. And people love cheap things, especially British people, because powdered wigs are expensive. So hooray for e-coupons or whatever!
Posted by Tim Anderson at 10:38 PM 3 comments:

Shootin' It: In Which Tim and Jimmy Get Tawdry

Thank you!
Posted by Tim Anderson at 2:44 AM No comments:

Email ThisBlogThis!Share to TwitterShare to FacebookShare to Pinterest
Labels: gross, shootin' it

Okay, so my band simpleshapes played a mostly empty room last week at a place called Bar East on the Upper East Side, and, though we were missing our guitarist Peter, it was a great short set. More people should maybe see it! Apologies for the sort of shitty sound, but stop being so judgmental of my friend Dan's cell phone camera! Anyway, please enjoy these three power ballads we've put together for you, our public who don't even know we exist.

Listen to internet radio with theauthorsspeakXcom on Blog Talk Radio

On Saturday I had the pleasure of speaking with Eric Mays of The Authors Speak podcast about my book Tune in Tokyo: The Gaijin Diaries. He liked it! It was a fun conversation, though I must apologize for all the "uh"s and "kind of"s and such. Takes me a while to get to some of my points, but I do think I get to most of them. And who doesn't like to take the scenic route? Okay, most people, but give me a break, it was my first live interview! And I managed to get through it without calling Eric a slut or a prostitute, which I consider a victory.

Anyway, thanks, Eric!
Posted by Tim Anderson at 2:46 PM 2 comments:

The Advocate Reviews Tune in Tokyo! 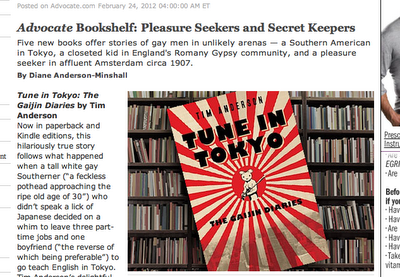 Well this is a thrill. America's oldest gay magazine, The Advocate, has given Tune in Tokyo a great review. I came of age reading this magazine (well, flipping through it in hopes of finding dirty pictures), so I'm so excited they've given me a shout out. :)
Posted by Tim Anderson at 3:25 AM No comments: 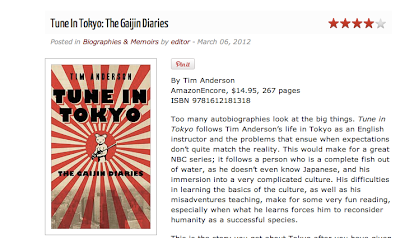 Hey, I'll take it! Didn't even know this was happening, but then it turned up in my Google alert.
Posted by Tim Anderson at 3:05 AM 1 comment:

Rush Limbaugh Is A F**king Pussy 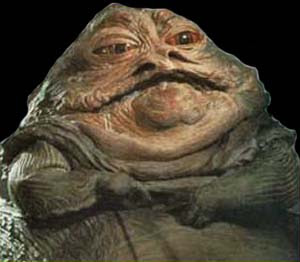 Oh, aren't you all just sick and tired of hearing about bloated reptilian taintsack Rush Limbaugh? I know, I know, he's just gross and not really worth expending any typing energy on. (Save those fingertips for Sarah Palin, I always say.) And if this were any normal boring "Rush Limbaugh said a bunch of dumb bullshit using his special patented brand of special-needs satire" I wouldn't even be typing right now. But the fact that Rush Limbaugh is such a f**king pussy makes me want to type that phrase over and over and over.

As you no doubt know, Rush called a Georgetown law student a "slut" and a "prostitute" because she wants health plans to be required to cover contraceptives, for various reasons. Rush, because he doesn't really understand how lady parts work, thinks that this student, Sandra Fluke, just wants the government to pay for her and her friends' sexytime, all the time, and also seems to think that every time a lady has the sex she must put a pill into her vag. (I'm told on good authority this is not true!)

So whatever, he called this nice young lady some ridiculous names and the shit predictably hits the fan, as usual. But the most annoying thing about this whole episode--besides the fact that we must dwell on a figure of such Biblical monstrosity as this vulgar radio commentator pig who is so flush with cash he could live anywhere but decides to live in fucking FLORIDA--is that, when he's forced to apologize by his advertisers and by Clear Channel or whatever, he can't even do it like a man. He can't just fess up and say "sorry, I was a total asshole, I regret it, I hope you can forgive me." No, he has to twist his apology into a limp attack on "the left," whoever they are (Radiohead?). Read this idiocy:

"I don't expect, and I know you don't either, morality or intellectual honesty from the left," he said. "...This is the mistake I made: in fighting them on this issue last week, I became like them. Against my own instincts, against my own knowledge, against everything I know to be right and wrong, I descended to their level. I feel very badly about that."

Yeah. What a f**king lame-ass mother**ker. "Sorry, It's "the left"'s fault, because of bad morals/slutz." Pitiful. I thought Republicans were the party of personal responsibility. But really, have they ever fessed up to anything that they've done? ANYTHING? Have we even heard George W. Bush's name uttered at any of the 1,079 Republican presidential debates? No, because who's that? Holy shitsnacks. Rush Limbaugh is a three-year-old saying "Not me!" What a tired piece of trash.

In conclusion, this man has had four wives. Women have f**ked him. Sweet dreams.

Also, I've had vodka tonight.
Posted by Tim Anderson at 3:31 AM No comments:

Congratulations on Your Marriage! Next Up: Death! 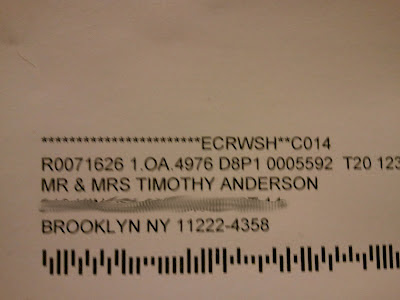 As you all know, I recently got gay married to my boyfriend of fifteen years, Little Man Jimmy (now obviously known as Mrs. Timothy Anderson), and we are currently trying to put together a sexytime party to celebrate. This will happen in June and will involve pizza, pasta, booze, popsicles, Pop-Tarts, hot yoga, and a performance by Wilson Phillips.

So, in the mean time, what other things are on the horizon for the happy couple, now that we've taken the plunge that we are now legally able to take (slowest plunge ever), against the wishes of President Leviticus and Vice President Santorum? Well, there are all sorts of benefits to being married, obviously. For example, we can check a new box on forms. Also, is there a tax break or something? And if were to have a child now, the public would not be forced to refer to it as an awful bastard child. That's a step forward, no? Sadly, we're not going to be having children because the two of us can barely take care of our cat. But we don't want children in the least, so it works out.

Anyway, this week we finally received our first piece of joint junk mail. (See picture above.) Whatwoulditbe? Whatwoulditbe? What. Would. It. Be? A pre-approved credit card application? A chance to jointly donate to the SPCA or the Recall President Leviticus campaign? A hilariously misguided set of coupons for Home Depot? No, none of these. Here's who it was from: 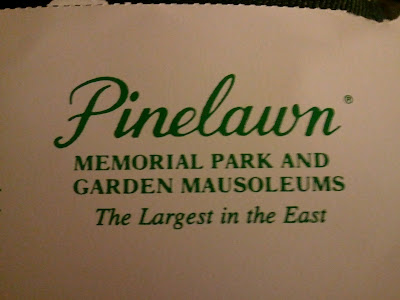 Hmmm. So, we are being invited to get joint plots at some terrible mausoleum. Okay. "Congratulations on your recent nuptials. Now that you are married, you obviously wish that you were dead. Let us help." Their actual pitch: "Let's Face It Now." 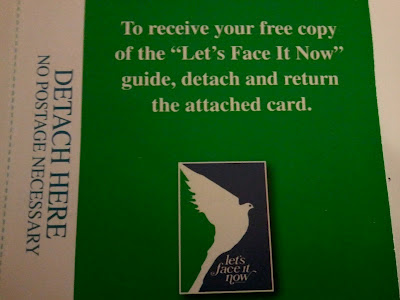 Well, they're barking up the wrong tree with us. We both want to be burned up. Then Jimmy wants his ashes scattered in the German town of Gelnhausen where he lived when he was a young army brat. And I want mine sprinkled into the marshmallow cream icing of a Mississippi Mud cake that all of my friends will consume at my wake on some rooftop in Brooklyn (Kelly, can you host?) while crying and listening to the Flash Gordon soundtrack on repeat on massive speakers. (Sorry, but those are my wishes, friends, so make it happen.)
Posted by Tim Anderson at 4:16 PM No comments: