Tune in Tokyo Successfully (If Fleetingly) Placed on a Bookshelf at the Strand Bookstore, NYC

Fans of my book Tune in Tokyo have obviously been clamoring for the book to be available in bookstores and not just for sale on Amazon. They've been climbing walls, overturning police cars, and setting themselves on fire in desperate attempts to have their voices heard. I feel your pain, dear readers. I also wish that bookstores would heed the wishes of the people. The people will not be silenced! It's almost exactly like what's going on in Egypt now. (Awesome/Tasteless Segue Into Topical Subject Award, please.)

Anyway, none of this is true, but if it were, fans of Tune in Tokyo would have been celebrating for roughly two hours last Thursday, when the book was placed on a display shelf downstairs at the mighty Strand bookstore here in NYC. The Women's National Book Association (of which I'm a member, because I'm every woman, as you know) was holding its first open mike night and I was on the standby list, yay! I didn't get a chance to read, but since I was on the list my book got some good face time on the display shelf of readers' works.

Another open mike night at the Strand is in the works for the spring, so hopefully my book will be available to buy at one bookstore in the world for two more hours in late April/early May. A victory for the people, in other words.
Posted by Tim Anderson at 1:32 PM 1 comment: 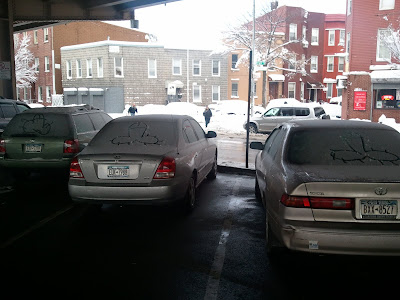 As you probably know, snow has eated New York once again. But the real story is the one that the local news is afraid to report, the one about the trickster bandits making their way through Brooklyn in the wake of the storm, slithering under the Brooklyn-Queens Expressway and defacing snow-covered cars with their chilling gang symbol, a stubby dick with prickly balls.

Long Walk on the Beach

Folks, I've started contributing to a great site called The Nervous Breakdown, and this is my first story, an ode to Dad... 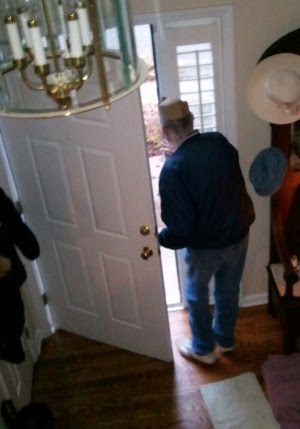 Dad always loved taking the long way to wherever he was going. If there was a way to get to school, church, or the Little League baseball field that involved twisting and turning our way through the backroads of Raleigh until all us kids were turning green and ready to hurl, that was the route Dad preferred to take. Just like in that Robert Frost poem. 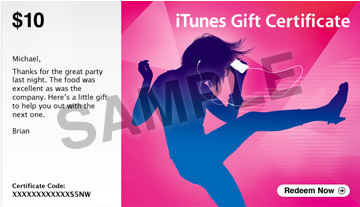 You know, Apple usually has impeccable taste in commercials/promotions/whatever. They're always so well-played, hip but not too cloying. But I'm going to have to go ahead and call foul on the sample iTunes gift certificate they've put together to show customers how their message to the recipient will look. Because it's just weird. Brian apparently went to a party at Michael's house last night and had a great time, so naturally he decided that instead of writing Michael a nice message on his Facebook wall he'll buy him an iTunes gift certificate. Sure, that's fine. Brian also writes him a note:

Thanks for the great party last night. The food was excellent as was the company. Here's a little gift to help you out with the next one.

So, Michael, I don't want to be the bringer of awkward news, but Brian wants to get in your pants, I'm thinking. He's flirty, he's complimentary, and he's bought you some free downloads (that's the "giving someone flowers" of the early 21st century) as a not-so-subtle way of suggesting you invite him to your next party, the naked one. And Michael, I'm really not just seeing what I want to see. I've talked about this with my friends Ruth and Mike, who tipped me off about this weird message when they bought me an iTunes gift certificate recently. So I'm, in turn, tipping you off. I'm only trying to help, Michael. Because there's nothing worse than having to face a dude showing up at your next party in a lycra top and Superman Underoos who clearly will not be let down easily. (Trust me, I've been there.) Don't say you weren't warned.

Been and Gone: Trish Keenan from Broadcast

You know what I'm really tired of? People dying. Trish Keenan was the lead singer of woozy drugged-out retro-futurist space poppers Broadcast and she has died at the age of 42—42!—from complications from pneumonia. So sad. Just not right at all. 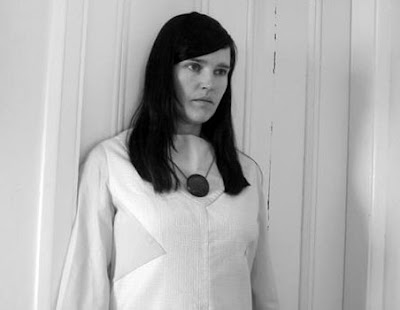 Stay alive, folks.
Posted by Tim Anderson at 12:01 AM No comments:

Email ThisBlogThis!Share to TwitterShare to FacebookShare to Pinterest
Labels: been and gone 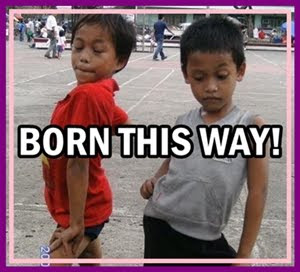 Well, this is certainly the most winning website I've visited in a long time. It is "[a] photo/essay project for gay viewers (male and female) to submit pictures from their childhood (roughly ages 4 to 14), with snapshots that capture them, innocently, showing the beginnings of their innate gay selves."

Laurie, can you take the day off and go over to Mom's house and start flipping through the scrapbooks? Shouldn't take you long to find a good one. 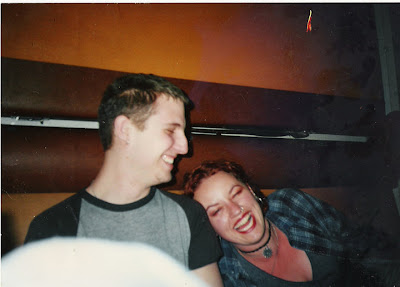 My friend Kelly Guffey died five years ago today. She was 32. In other words, waaaaaaay to young to be dying. As the years go on it becomes even harder to believe that she is gone, because good GOD she was electric, the most vibrant, infectiously hilarious person I've ever known. The above picture was taken on a train we took in 1994 from Pisa, Italy to Nice, France. We were laughing about some cosmic/nonsensical thing she or I had said and our friend Scott went clickety click with the camera and voila: best Eurorail picture ever. Why did we not get a commercial out of this?

Kelly, I love you and miss you every day. Remember when we went to see Everything But the Girl but before the show we stopped to get coffee because we didn't want to arrive too early because the opening band was lame and we had no desire to see them and we stayed too long at the coffee shop yappin' and by the time we made it to the show Everything But the Girl were on their last encore?

That was time well spent.

Jesus God the World is Crazy and I'm Tired

So everyone please just watch a cute video.

Welcome to the First Meeting of the Republican Book Club

People make fun of some Republican leaders for scorning any kind of activity that doesn't involve fishin' or shootin' critters or fellatin' the Constitution or hatin' the gays (while secretly suckin' cock), but that is so unfair. For example, there's a new yearly Republican get-together where candidates for chairman of the Republican National Committee all sit at a table and try to think of any books they might have accidentally read in their lives. Witness the breathtaking scholarship on display in the above video.

The first to announce his favorite book is the guy who just reflexively says The Reagan Diaries because obviously that's the only non-gay answer to the question. Hopefully he hasn't read any other books because indoctrination into socialism and sodomy officially starts when you finish your fifth Harry Potter novel.

Then there's the dingbat who says her "favorite bar" is probably her kitchen table, which is a lazy answer because that's everyone's favorite bar. Also, it doesn't actually answer the question posed, which was "what is your favorite book?" It's interesting that she heard the words "what is your favorite" and then a word beginning with "b" and she just naturally assumed that that word was "bar." (The word "book" was said pretty clearly, no?) Someone nominate this lady for Vice President, please.

But the real magic happens when Michael "the black Obama" Steele, struggling to keep a straight face, says War and Peace. Sure, Michael, we'll buy that. At least we might have if you hadn't then completely undermined yourself by saying "It was the best of times, it was the worst of times," which is such a wonderful opening line (almost as good as the opening line in my book, which all Republicans can buy here), but, sadly, is not the opening line to War and Peace. I'm sure Charles Dickens is laughing and then throwing up in his grave.

Anyway, stay tuned, because at the next book club meeting these folks will be discussing the many "trickle down economics" metaphors in Sarah Palin's classic jailhouse memoir Going Rogue. 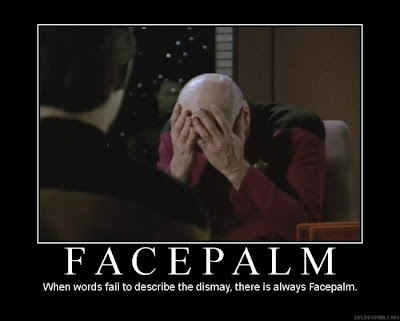 Posted by Tim Anderson at 2:54 AM No comments: