My Cat Stella Purrs in the Face of NYC Snowricane Horror


Yes, despite the fact that this is our last night on earth, owing to the spastic flailing devil's storm that is right now barreling toward NYC, my cat Stella couldn't stop herself from just stone cold sittin' on Jimmy's lap and purring her ass off. I got it on this film, which is awesome, because I'd wanted to capture a tiny little fragment of what our last night on Earth was like, and this pretty much sums it up. Here's what you will hear: my loud-ass voice, some Stella purrin', and then a god-awful ruckus that is my reaching into the Dorritos bag to get a few more chips because I was hungry. Sorry bout that last thing, but the rest is golden.

Anyway, I thought, you know, we live in the big city and everyone will want to see our mad crazy hurricane blowout, so you're welcome, see you in heaven, we'll be the shirtless ones wearing the powdered wigs and Bugle Boy jeans.
Posted by Tim Anderson at 3:28 AM No comments: 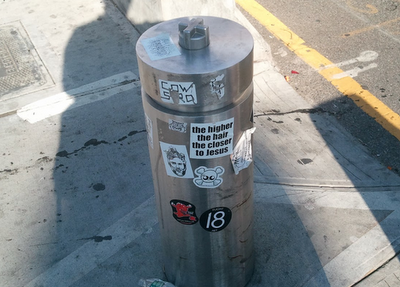 Well, the above sticker, which some armchair philosopher hobo slapped onto a pole on the Williamsburg Bridge, is in the latter category, I'd say. Because is there any doubt that folks like Elvis, Melanie Griffith in Working Girl, and '80s Joan Collins are indeed at least a little bit closer to Christ than the rest of us? The answer is no, there is no doubt.

And you know what this means, right? Yes. Jo from The Facts of Life is getting into heaven, and you're probably not.

It's also a little sad for all the balding/bald/thinly haired folks out there, because they're at a distinct disadvantage. But buck up: this is precisely why God invented wigs and weaves.
Posted by Tim Anderson at 2:45 PM No comments:

My Camera Phone Will Not Be Denied: Morrissey at Radio City 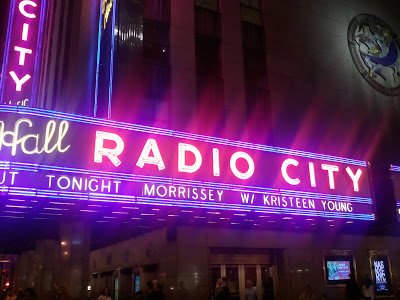 Can you believe that I'm almost 40 years old and I haven't ever seen Morrissey live? Wait, let me ask that again. Can you believe I'm almost 40 years old? Isn't that crazy? Like completely bonkers? Like you can't even make heads or tails of that fact? Can it be possible? I know, I know, it doesn't make any mathematical sense, but still, you can't really argue with the mathematical sense it truly makes.

Anyway, listen to this magical story: I was just lamenting the other day, after realizing that I'd just missed bumping into Morrissey at the Strand bookstore a few Sundays ago, that I'd never seen that charming man live. How could that be? Then, out of the blue, I get a text from my dear friend Laura asking me if I had any interest in going to see La Mozzer at Radio City on Wednesday. What are the odds? Of course, I was all "Yes, yes, a million times YES!"

I was a little worried that his voice would be weak from all that hard core vegan eating he's been doing (I heard that he's got a pretty bad arugula habit), but he sounded robust and flawless. He began the show by immediately throwing us sycophants a bone with an exquisite rendition of the timeless Smiths slowjam "Last Night I Dreamt That Somebody Loved Me."

It was nice to see Oscar Wilde make an appearance between songs. 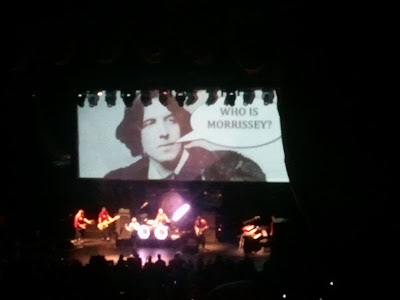 It was less nice to have to sit through the interminable PETA agit-prop snuff film played during my least-favorite Smiths song "Meat is Murder." There's really nothing like watching cows and chickens and other farm animals being slaughtered on the big screen for your viewing pleasure. Nothing like it. Feel good movie of the year. I wasn't surprised that Morrissey went there--he's a strident little thing in his old age--but gah.

Another complaint: too many new songs. I know, I know, he must get tired of being told to shut up and play the hits, but all I wanted from him, really, was "The Boy With the Thorn In His Side," and it's a bummer that he couldn't have swapped out one of these forgetable new tunes to make room. Sure, I probably would have wet my pants if he'd played that, but that's why I wore my Queen is Dead-brand adult diapers.

Still, the man delivered a fine, fine performance, and pretty much everyone in the house was beside themselves with adolescent joy, particularly the fellow in the row in front of us who I'll call "Ducky from Pretty in Pink," who was going all in on the fey hand stabs and the new wave hair tweaking.

You wanna know what hits he played, so as you can be more jealous of me? Okay: "Shoplifters of the World Unite," "Every Day is Like Sunday," "Still Ill," "Speedway," "Spring-Heeled Jim," "Ouiji Board," "I Know It's Over." Could you be more envious? Yes, of course you could, but the fact that you harbor even a tiny amount of psychotic envy makes me not only happy but downright smug. 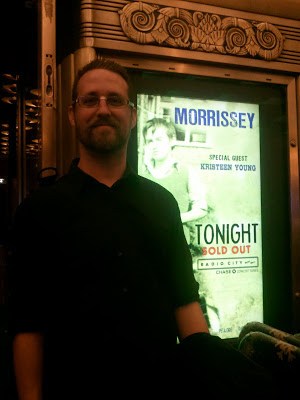 In conclusion, enjoy this blurry and off-puttingly low quality video of Morrissey getting bum-rushed during "Still Ill."

Posted by Tim Anderson at 5:37 PM No comments:

My Camera Phone Will Not Be Denied: Dina Martina at the Laura Beechman Theater, NYC 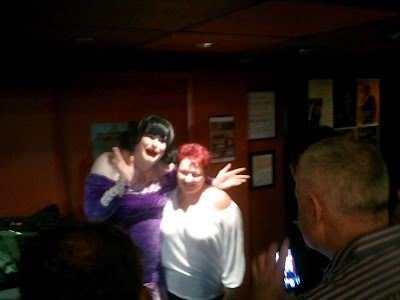 Jimmy and I enjoyed a night at the theatah last night, because we are urban sophisticates who sometimes find something we both want to do on the same night. I recently discovered Dina Martina thanks to my secret conservative extra-marital boyfriend Andrew Sullivan and his blog. Andrew started featuring Ms. Martina on his web series Ask [Someone] Anything, in which he gets a prominent person--usually a political or cultural pundit--to sit down and field questions from readers. Dina Martina is a nice "lady" singer Andrew loves who performs all summer in Provincetown, where he summers like a big old gaywad, and so when she landed in NYC to do a stint of shows, he asked her to sit and preview her show/field questions from the unwashed Internet. It was her insightful and edumacational answers that convinced me that Jimmy and I could not spend our Sunday night doing anything more meaningful than basking in the glamor and clammy glow of La Martina.

She did all sorts of stuff from the great American songbook, from "Genius of Love" by the Tom Tom Club to "Legal Tender" by the B-52s, from the theme song from "The Love Boat" to a song for children that she'd written on a crumpled up piece of notebook paper she appeared to have found in a public toilet. It was, as Mitt Romney might say, "marvelous." She's on her way to London, so London peeps, she's playing at the Soho Theater from October 23 to November 3, get your tickets, it's good clean American comedy, like the Osmonds but so much better.

Jimmy darted out before I could force him to take my picture with her, but that's okay because I just took one myself, minus me, plus a nice woman with electric red hair.

Below, watch Dina take a question. You'll learn something, maybe.

Posted by Tim Anderson at 3:24 AM No comments: