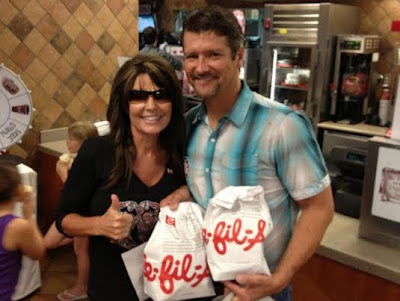 Okay, okay, Sarah, we understand that you are feeling a little bit ignored these days, what with Mitt Romney off saying dumb shit all over the "small island" of England, which is what you should be doing! It's not fair, truly. Obviously, if Jesus hadn't been murdered by Obama in November 2008 you might be making these foreign trips as the current Vice President, rearing your head at 10 Downing Street and Buckingham Palace and Harrod's and Hogwarts. So how are you supposed to maintain your relevance when the only people paying attention to you are the house-bound hoveround ALL CAPS EMAIL crowd who are constantly fapping to the photo albums on your Facebook page?

The answer is you must choose the latest culture war battle and visit the troops on the field! So get yourself and your dumb husband down to the Chick-Fil-A, where all the best Christian soldiers get their waffle fries, and have one of your poor kids snap a picture of you proudly holding just-purchased bags of delicious stomach cancer so that you can upload it and catapult yourself back into the national conversation about gay marriage and fried chicken sandwiches. Pay attention to Sarah, everybody!

So here's a picture of Sarah Palin being a sassy bitch. War photography by Piper Palin.
Posted by Tim Anderson at 2:27 PM No comments:

There's No Saying "No" to an Offer This Good 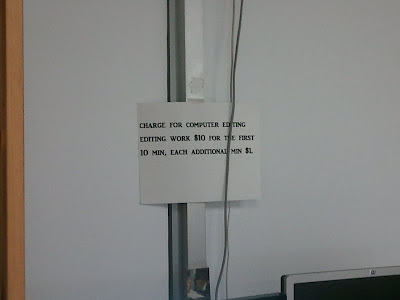 I had to go get passport photos made the other day, and while I was waiting for them to be spat out of the machine or whatever, I noticed the above note taped to the wall of the charming little shop I went to on 14th Street. Now, I don't generally need computer editing done--I'm an editor, after all, so I can edit my own computer, thank you very much. But if I were in the market for such a thing, I don't know how I'd be able to turn down such an amazing offer.

In fact, I'd say this almost beats the "buy one cone get a second one free if you buy a third one for twice the price" deal I got at the ice cream shop that time.
Posted by Tim Anderson at 1:19 PM No comments:

By the Way, the Dance Marathon is Over There 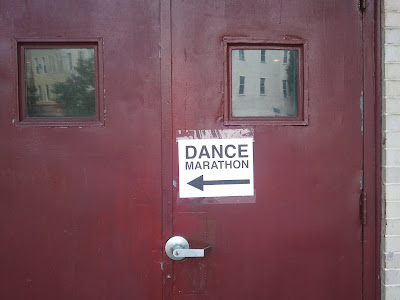 Hey, hold on, you're looking for the dance marathon, right? This is the wrong door. You need to go that way and you'll find it over there somewhere.

Are you really wearing that for a dance marathon? Hmm. No no, it looks great, it just seems like an Elmo costume will get really hot after a few hours of doing the Twist. Oh, you're supposed to wear a costume? Well, I myself would have dressed as a pole dancer, but then, I sweat like a hog.
Posted by Tim Anderson at 2:16 PM No comments:

Snack Tips from a Type 1 Diabetic 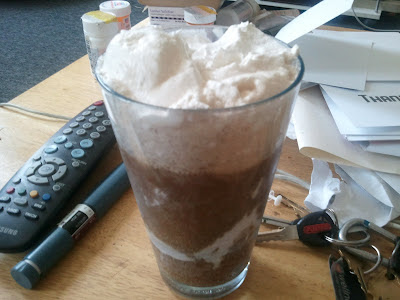 So, thirsty scholars, are you looking for a tacky taste treat made from stuff you just have hanging around the house? Well you've come to the right place, because I am, too, and I'm a type-1 diabetic so you know it's gonna be good! Today's recipe: Root Beer Whip-Its. This is a fizzy, creamy beverage that will soon be the next national drink. What you do is you get a pint glass out of the cupboard, then retrieve some Diet Root Beer from the fridge. Pour some of the latter into the former, then go over to the freezer and get some Cool Whip out of that thing. The Cool Whip will not be totally frozen but it will be hard, so just carve out a few ice cream shovels full of it and padonk 'em in the glass. Then plunge a bendy straw into it and hark, the stars will align, angels will sing, and you'll be young and beautiful again, standing there with your golden locks cascading down your shoulders and holding in your hand a creamy, fizzy sweet beverage that will tingle your taste buds and cause your friends to openly laugh at you when they realize what you spend your time doing.

You know, sometimes you just want to drink something weirdly delicious that's also fun to look at, and this beverage hits both targets. And don't worry about the Cool Whip, diabetix: it only has 1 gram of sugar per two tablespoons, exactly the same as half and half. Sure, there's some fat up in there, but you're going on a long bike ride later, so you'll burn it off, easy.

So drink up!
Posted by Tim Anderson at 1:06 AM No comments:

Well, it's finally official, thanks Andrew Sullivan! My secret boyfriend Anderson Cooper (or "Coop," as Jimmy and I like to call our life-size clay model) has finally admitted that he's totally gay for boys. We in the New York media (yes, See Tim Blog counts as that) have known this for a long time, because we've got sources in high places. In my case, I was my own source, in one high place.

As both of my readers might remember, back in the days when I was gainfully employed I used to go to David Barton Gym in Chelsea, truly the gayest gym in all the land. So gay that you were always twice as likely to see a hot dude twirl and high-kick between sets of squats as you were to see him not do that. Walking onto the main floor of the dimly lit hardbody wax museum always felt like entering a Lady Gaga backup dancer green room, or a porno set, or a Tom of Finland live action film shoot.

ANYWAY, there was one day of the week (not gonna say which one) that Anderson was always there with his super-mega-hot boyfriend pumping iron, being handsome, and pretending to completely ignore me as I sat at the bench press next to him reading an upside down New Yorker. I was not fooled!

I guess what I'm saying is I have seen Anderson in his underwear in the locker room and you have not.

In conclusion, Anderson Cooper is sexy, famous, rich, and now officially gay. Congratulations, Anderson, can you now please give me one of those first three things, for freedom?
Posted by Tim Anderson at 6:51 PM No comments: