Editorial: Speedos and Our Precious Freedoms 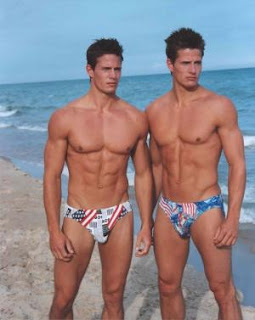 People, the killjoy lefty media is at it again, attacking our freedoms for their own ideological satisfaction. The Daily Beast's Sean Macaulay has written the most ridiculous opinion piece in the history of Internet jernalizm and it must be called out for its lies, damn lies, distortions, falsities, misrepresentations, deceit, untruths, and fabrications.

In his hit piece on the world's greatest ever invention, the Speedo, Macauley argues that the time has come for a ban on "offensively small bathing suits". I....I can't even relate to that statement. Is this Macauley character even human? What language is he typing? Where is his birth certificate?

Certainly Macauley has a point about the frightening and dangerous possibilities inherent in allowing someone like Rod Stewart or Carson Kressley access to the mighty weanie-bender, beloved by everyone with a pulse. That is because Speedos are not made for men such as Rod and Carson. They are made for men such as David Beckam, Ricky Martin, and some guy named Justin Gaston that I just found out about by reading this awful article.

If you just ban the Speedo outright, you may be saving yourself from having your eyeballs melt to your face at the sight of Arnold Schwarzenegger or Giorgio Armani or George Hamilton or Jack Nicholson in a sagging pair of colored underwear; but you also face the real, and much more chilling, possibility of never being able to witness this guy, this guy, or these guys in the blissful state of undress God intended them to maintain all day, every day, for eternity. This is not only a loss for us as individuals. It is a loss for us as Americans. A tragic compromising of our very humanity that I, for one, cannot countenance.

If we have to live in a world without the Speedo, the terrorists have already won.
Posted by Tim Anderson at 10:52 PM