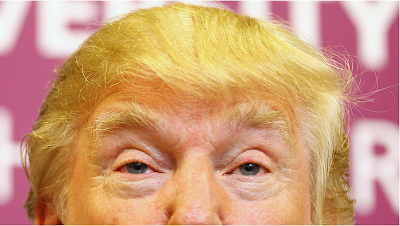 We all know Donald Trump is an odious toad. We've known that for a long time. But he was a sideshow, a cartoon bag of ugly that emerged every so often to promote his dumb (but sometimes alluring!) teevee show and "fire" somebody from a stupid non-existent job of being a tool. It's only recently that we've all had to reevaluate our relationship with this man-sized herpe. And we all hate him now. And hatred brings you to a place where you just can't believe you ever put up with a person, right? Like you can't believe you voluntarily looked at this person on a television screen.

But it was only the above photo of this orange wrinkled old troll that made me finally understand the essence of the person we've been blindly subjecting ourselves to all this time. Doesn't it make you feel molested? Like you can feel the rush of a ferocious STD running through your veins? Like you are just ready to shit and throw up at the same time? 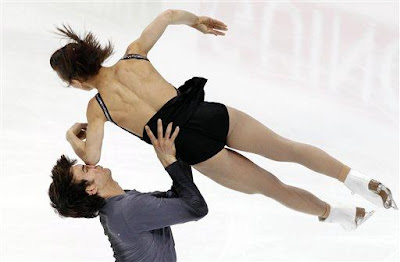 Maybe next time they're on the ice Eric will be more likely to grab her where we queens of the ice are supposed to be grabbed during these ice skating displays—not above that hot, plump, luscious ass, but directly on it.
Posted by Tim Anderson at 2:20 PM 5 comments:

My Camera Phone Will Not Be Denied: Zola Jesus at the Bowery Ballroom 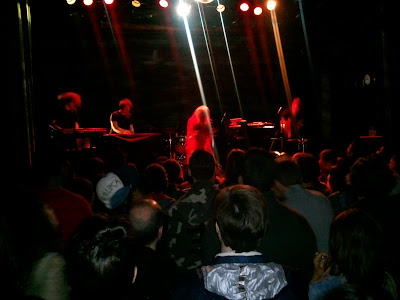 Jimmy and I went to the Zola Jesus show Saturday night and it was awesome, obviously, because Zola Jesus is a crazy platinum-blonde goth bitch. (I've previously mentioned Ms. Jesus on this blog here.) I must say, though, that we were disappointed at the lack of goth pageantry among audience members.

Now, every time we've been to a show by, say, Siouxsie, we've been guaranteed to share a room with a gaggle of Aquanetted goons wearing veils, fishnet hose, stilettos, pirate trousers, capes, studded leather accessories, tight lacy corsets, tattooed-on teardrops, velvet vests, frilly blouses, and lots and lots of operatic face paint. And, at least in DC, we've also been guaranteed tables stocked with ridiculous goth lifestyle fanzines featuring innumerable photos of dreary folks hanging out at the cemetery and advice columns answering readers' questions about how to be goth and also have a real job, in an office. But there was none of this to be had at the Bowery Ballroom Saturday night. I did see one Asian girl wearing a pinafore, but that's it. I mean, there were a shocking number of hoodies. Hoodies, people. At a goth show. And they weren't even black or velvet magenta. They were, like red, blue, and other shocking colors. WTF, NYC? I expected more of you.

We missed the first band but caught the second one, Naked on the Vague, from Sidney, Australia. They were kind of awesome. Lots of sparkly 80s guitar lines and droney keyboards and vocals. The lady lead singer/keyboardist had long blonde hair, defiant bangs, and a monotone voice that she obviously came up with while vacuuming when she was a teenager. As an added bonus, the bearded guitarist was dressed like an Amish guy, complete with flat hat. (At one point, Jimmy tapped me on the shoulder and whispered in my ear, "He's got a nice big juicy butt," which is such a disrespectful thing to say about an Amish guy. I was more into the bassist anyway.)

When Ms. Jesus walked on, she was surely no taller than 5 feet tall. (Well, she was no taller than 5 feet throughout the show, not just when she walked on.) And--shocker--she herself was wearing a hoodie. Except this hoodie was the kind that those Jawa traders wore in the original Star Wars. And it was orange. Anyway, she may be 5 feet but her voice is taller than 30 Rock, and she was Not. Holding. Back. God, this show was awesome. And on one of the songs (my favorite, "Poor Animal"), she even brought on a goth lady violinist, which means extra points.

So the question becomes, why does my Droid phone insist on taking such shitty concert photos? Perhaps because I haven't been able to figure out how to activate the zoom. But I refuse to accept responsibility for that. Anyway, I did what I could, and I even took a short film of Ms. Jesus hopping off the stage and zipping through the crowd. You can't see shit and the audio is offensively bad, but you sort of get the idea, kind of, in a way (but not really). 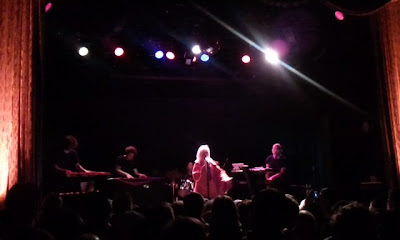 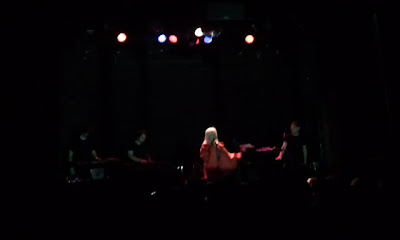 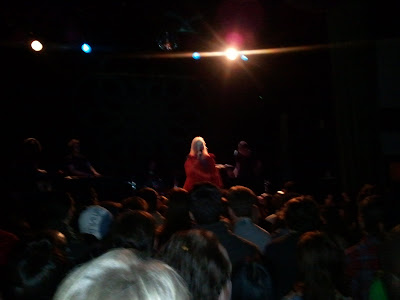 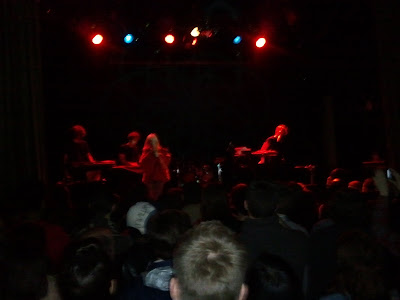 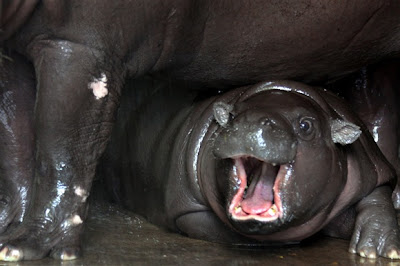 And he loved that teat.
Posted by Tim Anderson at 5:05 PM 1 comment:

Jesus God, what on earth?! Parts of Raleigh got tore the fuck UP by a bunch of dang tornadoes yesterday. One of my friends spent her afternoon in a closet with her three dogs. (Dani, call me back, dammit.) A trailer park not far from my brother's neighborhood got leveled. Those poor people had no chance. My brother works at 911 dispatch in Raleigh and spent hours fielding the most horrific phone calls.

There but for the grace of God, etc. 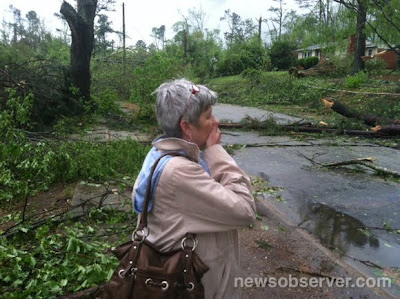 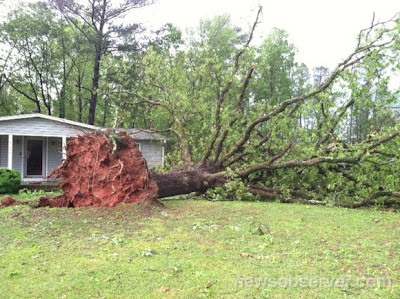 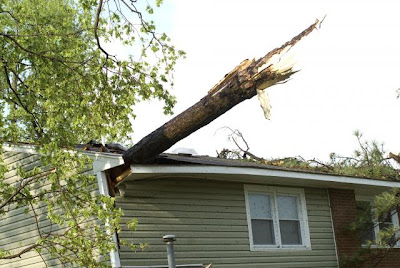 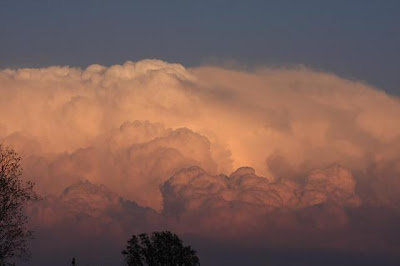 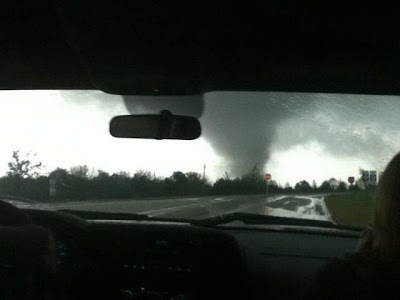 Posted by Tim Anderson at 3:10 AM No comments:

Time for more Japan love. Pizzicato Five were a hyper-prolific Japanese pop band of the "Shibuya-kei" style (an eclectic mix of jazz, pop, and electro-pop that originated in the Shibuya district of Tokyo) who released bunches of albums in the late 80s and 90s and were introduced to the U.S. in 1994 via the bouncy single "Twiggy Twiggy vs. James Bond" (video above) and a compilation album called Made in USA. P5 are the quintessential Japanese creation in that they took quintessentially American/western influences and filtered them through their Kitschy Nippon Weird-o-Nater to create something wholly and sublimely Japanese. And hella awesome, or, as the Japanese say, "へラ アーソム".

Bonus clip below of the single "Baby Love Child" in which lead singer Maki Nomiya sings in English.

Wanna Throw Up? This Should Help. 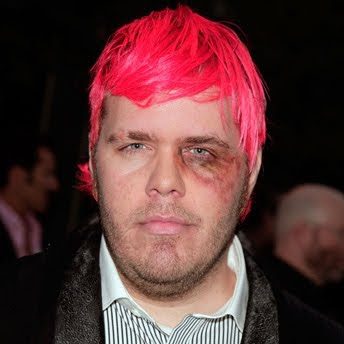 Hey aspiring writers! Have you pretty much given up on ever typing your way to any kind of decent income in this era of people only interested in reading free blogs and not wanting to buy any book not written by a trusted celebutard? Good thing, because today brings this news from Publishers Marketplace:

Top celebrity blogger Perez Hilton's THE BOY WITH PINK HAIR, the story of a child born with a shock of fabulous hair that sets him apart from his peers, who uses the opportunity to find what makes him special and share it with the world even as some find this difference hard to accept or understand, with illustrations by Jen Hill, to Raymond Garcia for Celebra Children's, with Steve Meltzer to edit, for publication in September 2011.

Ugh, is there a pair of words in the English language more dreary and depressing than "celebrity blogger"? No, there isn't. Yes, Perez Hilton, the much not-admired gaywad who types mean/stupid things about dumb famous people for a living, has a book deal. A children's book deal. Somehow this is worse than Bristol Palin getting a deal to write a memoir. Bristol's a Palin, therefore she's a grifter who will gladly take the wads of cash that right-wing publishing imprints throw at her with abandon. We expect her to and would be a little disappointed if she didn't.

But this Perez shit is just crazytown. Are parents clamoring for more books by awful pink-haired humanoids? Who is going to buy this bullshit? For their kids? And read it to them?

In conclusion, I would sooner read Going Rogue: Children's Edition to my gay son (if I had one), because it's never too early for a gay boy to practice reading a bitch.
Posted by Tim Anderson at 11:11 PM 1 comment: 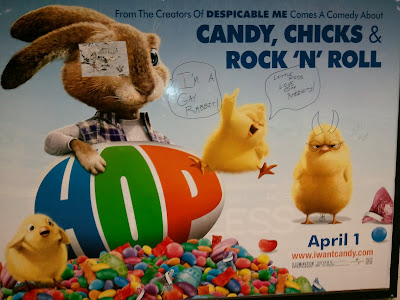 Your gay kids are gonna love this movie.
Posted by Tim Anderson at 12:58 PM 1 comment: 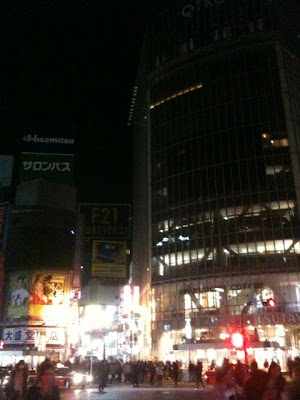 I received this update from a Japanese friend in Tokyo. He took the above picture was of Shibuya Crossing, which is one of the most lit-up places in a city with a LOT of really lit-up places. Those of you who have seen Lost in Translation might recognize it from the scene where Scarlett Johansson goes exploring and passes that giant dinosaur on the screen. Anyway, here's the latest:

People around Tokyo scare about radioactive and equally scared electric shortage. Night in Tokyo, no much lights in street. Attached picture is taken at scramble crossing in Shibuya. If we keep short the electricity till summer.... I don't want even think about that...

People in Japan are more or less obsessed with this disaster and living with sad feeling. We shouldn't forget victims but we need to release our mind apart from this sometime. Otherwise we are stifled with the sadness...