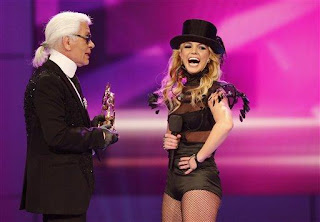 Britney Spears had a wicked tough primary battle for sure, full of manic head shaving, baby dropping, crotch flashing, and, of course, bloat. So it gives me great pleasure to see that the newly elected President of Fashion, ponytailed retard Karl Lagerfeld, has tapped her to be his Secretary of Top Hats and Fishnets. Britney is such an inspired choice for Sec of THaF; she obviously has experience with top hats dating back to her first tour in 1999 and, of course, she has worn fishnets ever since she was 12.

She sure has her work cut out for her, though, thanks to the embarrassing job performance of current Sec of THaF Lindsay Lohan, who, in direct contravention of her job duties, has been trolling around for the last few years wearing only a ketchup-stained white leather t-shirt (no underwear). Hopefully, Secretary Spears will be able to repair the image of American fashion abroad. Though she better watch her back because I hear Sarah Palin was totally gunning for the job.
Posted by Tim Anderson at 6:24 PM

May she be a good secretary. Let's hope she start her infamous meltdowns.