A Future in Busking 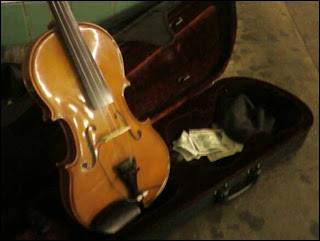 You may not know this, but I put on my busker's uniform from time to time (top hat, tails, tap shoes, nipple clamps) and troll on down to the subway with my viola to earn extra dosh to support my boyfriend and my cat. I tend to play a selection of popular favorites--crowd pleasers from ABBA to Connie Francis to some guy called Vivaldi. I hadn't busked in a while, but for some reason, on Christmas Eve I was compelled to drag my unwilling viola down to the southbound F platform at 6th Ave to see what kind of Christmas cheer I could forcibly inspire.

So, above is a picture I snapped as I stood on the platform, playing my heart out for cash. It was my first annual Christmas Music Revue, and, though I had only rehearsed five Christmas songs, it was a smashing success for about an hour, at which point I got REALLY tired of playing the same five songs over and over and over, even though I love Santa Jesus.

I did make a decent amount of paper for only playing 5 songs 5 times, though, so here's my plan for Our New Great Depression: I'll put together a much larger setlist and then, once the bottom falls out and Congress declares that Christmas will be year-round in order to stimulate the economy, and I lose my job and my apartment and my socks, I'll wrap my feet up in gauze, slip them into a couple of Converse High Tops, put on my Santa hat and play on the subway for the good people of NYC and become rich, rich, rich! Then I'll lose it all in a foolish series of investments (who knew aquariums made of papier-mâché would never take off?!) and throw myself down the subway steps to get on government assistance, yay!
Posted by Tim Anderson at 1:43 AM

aw hell I'm sorry I missed that! I would have paid to hear a couple renditions of Santa Jesus!

I wished I'd known. I so would have been there.

My 2 cents for next Christmas:
you don't have to play ONLY Christmas music... There are plenty of people who are greatful to hearing something which is NOT Christmas during this season when Christmas music is everywhere. Not to mention those not of the Christian faith. Plus - if you're not bored by your own playing you could play longer :)
Just my 2 cents.

This worked so much better than the other time you had to hustle to make money.