Is It Weird That I Was Touched by Larry King's Final Sign-off? 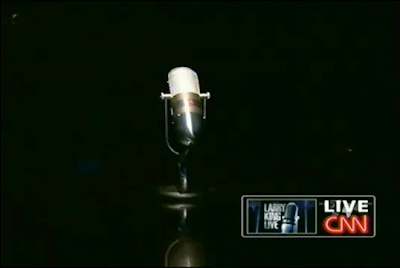 It may just have been that I watched it with my mother, who I'm visiting for an early Christmas in Raleigh, and we were both hopped up on buckets of eggnog. She and dad have watched Larry for years, because how else were they going to get answers to all the important questions percolating around the country, such as how the Dhalai Llama feels about NeNe of The Real Housewives of Atlanta or why Carrie Prejean is such a c*nt. The hour-long celebrity/real television news journalist/anchor circle jerk was kind of ridiculous at times (especially when Regis Philbin awkwardly tried to get Larry to sing with him, a horrifying few seconds of television if there ever was one), but Katie Couric's poem was really sweet! (Sarah Palin hated it.)

Mom was all teary and lip wobbly as Larry said his final "so long" and the camera slowly closed in on Larry's microphone, and I have to admit, my eyeballs were not completely dry. So since I was already halfway there and mom was going to bed, I put on Steel Magnolias, poured some more top-shelf eggnog, and wrapped myself in a blanket mom's friend gave her that says "A friend is someone who knows the song in your heart and can sing it back to you when when you've forgotten the words," which also made me cry.

In conclusion, all gay men are named Mark, Rick, or Steve.
Posted by Tim Anderson at 9:14 PM