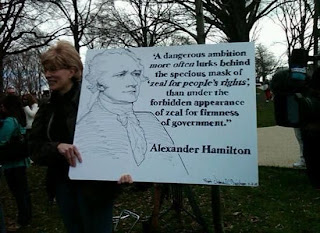 Alexander Hamilton, the Secretary of the Treasury under George Washington, believed in a strong national government and was the main proponent of a national bank--the Bank of the United States--that would have a major role in regulating and promoting economic growth.

Know what else is funny about this congenitally dumb woman's sign? Alexander Hamilton also said this:

Why has government been instituted at all? Because the passions of man will not conform to the dictates of reason and justice without constraint.

Men often oppose a thing merely because they have had no agency in planning it, or because it may have been planned by those whom they dislike.

In conclusion, George Washington, America's first tyrant, was soft on terror, Thomas Jefferson invented socialism, and Phyllis Schlafly was our most important Founding Father. Read all about it in Texas's new history textbooks.
Posted by Tim Anderson at 8:04 PM

I just got so angry reading that article. It's straight out of 1984! They shouldn't be allowed to do that!
Ugh!