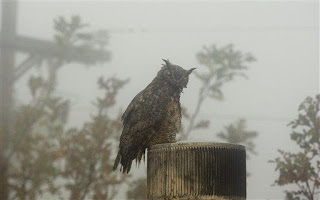 Good news, fans of the cuniculus undead: rat-faced troll Rudy Giuliani is doing the media rounds (well, the Fox media round) to complain about the Obama administration's plans to hold New York trials for the 9/11 conspirators. You'll be shocked to find out that after the World Trade Center Bombing in 1993, he held a completely different view! Watch this Daily Show clip, for proof:

But that's not the biggest Giuliani news. SeeTimBlog can now confirm that the former NYC mayor's rodent-like face, oily outer coat, and long serpentine tail are making the above Great Horned Owl from Texas extremely hungry.

After seeing Giuliani's verminous face on Fox News, the owl was heard remarking to himself in the trees "God, I feel like I haven't eaten in freaking months after seeing that delicious piece of hell trash."

The owl went on to say that he hadn't seen "such a good looking plate of weasel relish since the '08 Republican presidential primary."

After being pressed, the owl did admit that it's their complete lack of self awareness that makes Republicans more tasty.
Posted by Tim Anderson at 7:40 PM