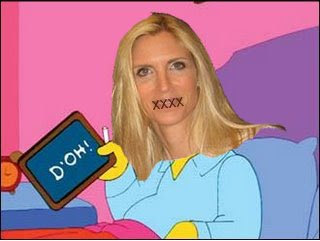 All the jokes that could be made about this have likely already been made at least five hundred times each, but whatever, I've got to document this. Aging right-wing show pony Ann Coulter recently broke her jaw (while talking, I presume) and as a result had to have her mouth wired shut. Is this just an elaborate rouse to get her name in the papers in advance of her new scholarly treatise about liberal faggots and the presidents they get elected, Guilty, coming out in January? Get all the pundits drunk off of too much schadenfreude and then kick them in the balls with all your footnotes come interview time? Pretty clever.

Thankfully, Ms. Coulter can still communicate using her neck (it can type!), so it's not a total loss.
Posted by Tim Anderson at 12:11 AM

This christmas, all the children across the land breathed with relief now that Ann Coulter's mouth was wired shut.