Been and Gone: Jesse Helms 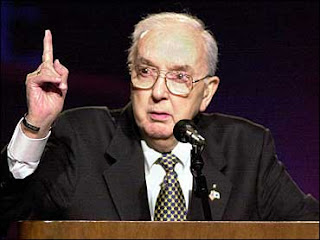 It’s always sad—and not at all symbolic—when a bitter old racist gay-hating senator dies on the 4th of July. Jesse Helms, the virile farm hand and Champion of the Aggressively Stupid from Monroe, North Carolina who served 36 terms in the U.S. Senate, dating back to the Great Hurricane of 1780 (the year his first gay child was born), has died after many years of threatening to and will finally get what’s coming to him: that’s right, high tea up in heaven with Jesus Christ; unfortunately for Helms, Robert Mapplethorpe will be serving the biscuits.

Helms did a remarkable job of making sure that North Carolina, my home state, remained a punchline throughout the 70s, 80s, and 90s. Whenever he said the word “liberal,” his jowly cheeks shook like exploded granite with righteous indignation. His cheeks also shook like that when he uttered the words “homosexual,” “art,” “communist,” and “croissant.”

Helms was a trailblazer in the fight against AIDS funding in the 80s. “There is not one single case of AIDS in this country that cannot be traced in origin to sodomy,” he said. Such a good point. And by the way, fuck Ryan White.

Helms was also sophisticated. In 1993, he proved that he could kick ass and take names on any middle school playground in the country when he decided to whistle part of the blackface minstrel-era tune “Dixie” on a Capitol elevator he was sharing with a black colleague, Carol Mosely Braun. “Watch me make her cry,” he said to fellow Republican Orin Hatch. “I'm going to make her cry. I'm going to sing 'Dixie' until she cries.” It was hilarious hijinks like this that allowed Helms to maintain his popularity year after year with good-humored illiterates and knuckle draggers across the swamplands of the Old North State.

Helms famously defended his seat in 1990 from terrorist insurgent (and black Democrat) Harvey Gantt, the first election I ever voted in and the first election that taught me all about the wonderful power of race-baiting in political campaigns. Good times.

In honor of Jesse’s passing, I’d like to revisit a time a few years ago when for some reason I was traveling on Highway 74 between Charlotte and Raleigh and happened to pass by a building in Wingate, NC that I somehow had not known existed before: The Jesse Helms Center. Obviously I immediately performed a liberal U-turn and made a b-line for this hilarious den of militant insanity. Upon my entrance, I was greeted by a friendly red-headed 22-year-old young lady and given a brief overview and tour of the center . She was slightly suspicious of me and my motives for being there, since I'm an obvious libtard, but she couldn’t really turn me away since I was the only visitor. Also, she was probably bored.

Below, please enjoy my photo evidence that a liberal gay communist terrorist sodomite was once allowed to wander the Jesse Helms Center without an armed guard in a white robe at his side. 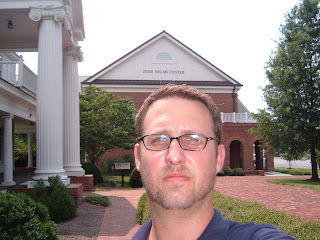 I prepare myself for my dance with the devil. 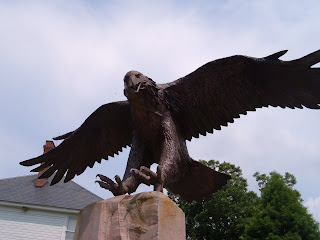 This is the most racist and homophobic eagle I've ever seen. 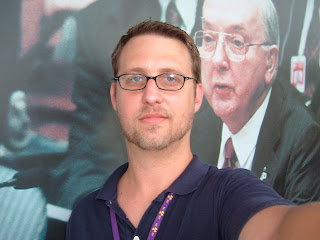 Me blocking Jesse's view of the UN Secretary General, who he totally hates. 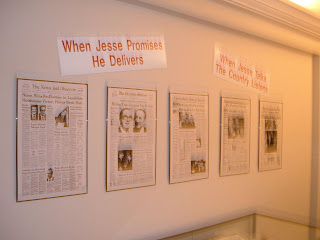 A wall dedicated to displaying every positive newspaper article ever written about Helms. 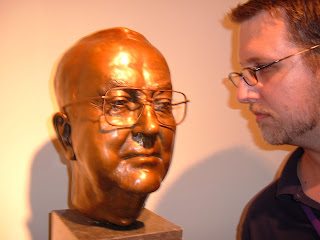 What's that, Jesse? Why yes, my eyes are baby blue!

UPDATE: The scholars over at Wonkette have the shocking truth (maybe!) about the nefarious cover up by the Jesse Helms Center of the actual date of his death: the unAmerican pansydate of July 3rd!
Posted by Tim Anderson at 4:57 PM

Email ThisBlogThis!Share to TwitterShare to FacebookShare to Pinterest
Labels: been and gone

you know (of course) that thomas jefferson and john adams both died on july 4th - in the same year - so I had to go online and make sure that plenty of unimportant political patriots share the date as well. I could not have abided one single connection made.