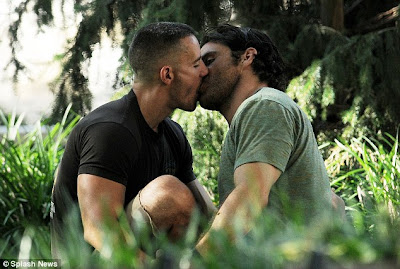 Oh, Coop. See, this is why you should have been sitting on my lap at the gym during those weekend workouts instead of lifting, squatting, sweating, and etcetera, all over the place, with your hot boyfriend Ben Maisani, who has allegedly now been busted with his hands all up in the gay cookie jar by the queerballs over at the Daily Mail, even though these photos look incredibly staged, for whatever reason.

I, for one, refuse to believe that someone could do this to America's Silver Fox. And especially with such a dumb-looking meathead. There's a time and a place for dumb meatheads, and that time and place is not in Central Park, during the daylight, where any idjit with a camera phone can record your love. (The time for dumb meatheads is pretty much any other time besides the time I just mentioned.)

Poor Andy, he's in a tough place. I mean, his boyfriend clearly deserves a spanking, but at the same time, he doesn't deserve one from our Anderson, you know?

In conclusion, Kathy Griffin will step in to beat Ben with a standing rib roast, which Ben will never recover from because it will be televised on the 15th season of My Life on the D List.
Posted by Tim Anderson at 5:12 PM