Devastation: My Cat Stella is Voting for Romney 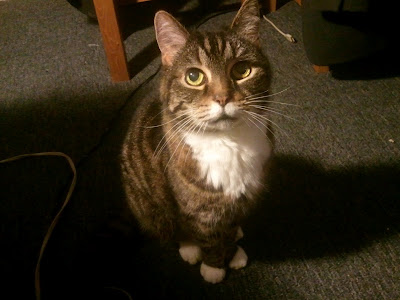 I'm just beside myself. I knew that Stella was a fiscal conservative--she's always been a pull-yourself-up-by-your-bootstraps kind of kittycat. (Sure, she's never worked a day in her life, but neither has Ann Romney!) And yeah, she did kind of have a soft spot for Sarah Palin back in '08 because, as she put it at the time, "that woman is a grade-A c*nt." (She was impressed!) But, really, I thought Stella and I both agreed that the Republican Party had gone absolutely bonkers in the past few years and in no way did they deserve to be in the White House again.

So when Jimmy told me that Stella had told him that she was a Feline for Romney, I was aghast. I went straight to the cupboard, took out the DentaBites, shook the packet, and into the kitchen she ran, at which point I scooped her up, took her into the living room, and sat her down to give her a talking to.

"Stella, what's this I hear about you planning to vote for Romney? You do know that he's a congenital liar, right? And that he's just going to bring back Bush-era policies that will screw the middle class? And that he's going to try to get rid of Obamacare? Stella, you do also remember that your daddy is a type 1 diabetic, which, in the parlance, is a preexisting condition?"

"Stella, Obama is not a socialist, Jesus."

"Stella, if Mittens wins you know what he wants to do? He wants there to be a Constitutional Amendment to ban gay marriage, which means your two daddies would be forcibly divorced and I would lose my damn health insurance."

"Stella, let's be clear: Obama was born in Hawaii, and Paul Ryan is in the tenth grade. Tenth graders can't be vice president!"

"You didn't build that."

"Argh. Okay, Stella, listen, if Romney is elected president, daddy's probably not going to be able to buy you Fancy Feast anymore. How does that sound?"

"Stella, do you spend all day on Breitbart.com? I'm going to have to start putting some parental controls on the Macbook."

"Girl, that poor dog is supposed to be a reason not to vote for Mittens."

"You're making less sense as this conversation goes on."

"Stella don't you dare walk away. Stella! If you go under that bed I swear to God I'll..."

Well, at least we have Sneaky Pie as a role model for cats who have gone astray. Give Stella a copy of Sneaky's book.

Sounds like Stella has been reading mom's emails again.