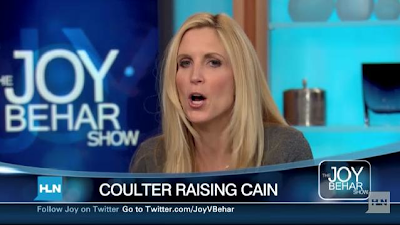 Ann Coulter is the right wing's #1 trannie. She is also Fox News's #1 trannie, the Internet's #1 trannie, and the #1 trannie of nine out of ten dentists (that other guy prefers Orly Taitz). Anyway, when a top-tier aging right-wing trannie talks about black folks, people listen. Because it's bound to be hilarious.

In conclusion, Ann Coulter's neck still, even after all these years, looks like the shaft of an erect penis.
Posted by Tim Anderson at 3:05 AM