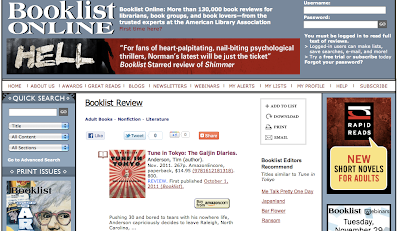 The reviews of the new AmazonEncore edition of my tawdry book Tune in Tokyo are starting to roll in, and so far so good! Booklist and Kirkus had nice things to say, Booklist even going so far as to compare it to David Sedaris's Me Talk Pretty One Day. From Booklist:

Sayonara, America. Hello, Kitty...Aside from such classroom encounters and problems of his own with the Japanese language that...recall David Sedaris' Me Talk Pretty One Day (2000), Anderson regales his readers with tales of Japanese popular culture and his own social life, clubbing and karaoke-barhopping around Tokyo...diverting observations on a country that gaijin Anderson calls "America on Opposite Day.

Anderson reliably mines the rich comic potential inherent in simple, innocent miscommunications and misunderstandings, but most impressive is the author's ability to sustain his hyperactive comedic voice throughout most of the book without losing his edge. A laugh-out-loud look at the East/West culture clash.

The book is out November 29, you can reserve your copy here, so what are you waiting for?
Posted by Tim Anderson at 5:27 PM