Holy Sh*t, the Primitives Are Playing Brooklyn What Year Is It? 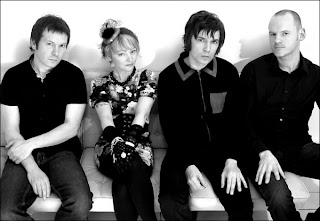 This is AMAZING news. I was flipping through the Onion yesterday and happened to see an ad for the Primitives' upcoming show at the Bell House in Brooklyn and just about spat out my KFC Double Down. The Primitives?! WTF?

Now, as dedicated readers know, I'm a huge '80s blonde power pop fan, and the Primitives were that thing I just typed incarnate, from around '86 to '91. In the intervening years I've kind of felt like I was the only person aboard that particular train. Sure, my friend Dani loved the Primitives like I did, but who else? Ok, Morrissey did once wear a Primitives T-shirt and proclaim them his favorite band. Any other folks? I'll tell you: no. Like every British band that ever graced the cover of NME or Melody Maker in the '80s, they completely vaporized after the mainstream British culture had finished with them. With a band like the Soup Dragons, this is understandable. But the Primitives surely had more power pop in them. Sadly, nobody cared, the end.

Or so I thought. Apparently, the Primitives have enough of a fanbase to have launched a 10-date reunion tour of the UK and a one-date reunion show in the US and OMG I'M GOING TO THE SHOW ON SATURDAY I'M GONNA SEE TRACY TRACY FACE TO FACE. Even better, I get to see PJ Court (above, second from right), the guitarist and main songwriter, who I crushed on mightily in high school. But wait a minute. Who's that handsome stranger on the left?

Anyway, because you won't be there, you should enjoy a little Primitives for yourself below. It's their 1986 single "Really Stupid," way before they'd learned to polish their instruments.

Again, if you had let me hang out with you in high school, we could have listened to the Primitives together all day long!

I blame society, Karen. But you know we couldn't have been really close in high school--our hair would have gotten all tangled.

Oh! And you know who didn't like the Primitives? That's right. Lisa. I remember being appalled at that. No wonder our relationship deteriorated. . . (Maybe I was too hard on her?)