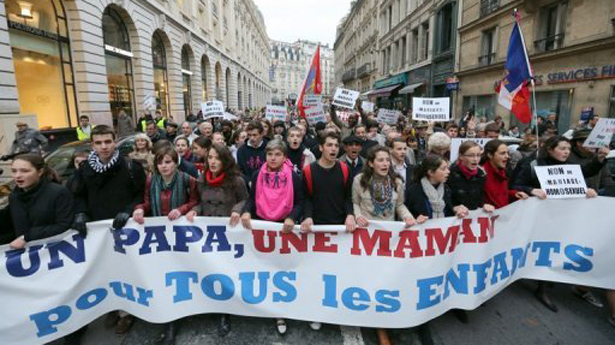 So here's something you didn't realize was a thing: French homophobia. Like "Russian pizza" or "Hawaiian goulash," French homophobia is something we just all assumed to be self-evidently nonexistent. Because the French, after all, are not only the most irritating people on the planet besides Americans, they are also the gayest. After one glass of Beaujolais, any French man you meet on the street or in the park or at the baguette emporium will be begging to have a rock-hard dick in his mouth. This is just scientific fact, proven by me, in the early nineties, in Paris. So this? This is kind of shocking. Sure, a majority of the French public is in favor of equal rights for gay couples, but, let's face it, that's weak support from what we all assumed was the only population on earth to have every single one of its citizens at least go through a gay phase, in their twenties, enthusiastically. What's going on?

There have been beatings. There have been mean words shouted in faces and written on placards. There have been offensive Facebook posts. And get this: some protesters against gay marriage are starting to call their movement "the French Spring." I mean. Don't they know that that sounds like the name of a kickin' gay bar on the Champs-Élysées? Don't they know that any phrase containing the word "French" and/or "Spring" sounds like a kickin' gay bar on the Champs-Élysées? These protesters are probably taking breaks from their marches and going into the woods with their buddies to, how do you say, make the sodomy. What do they tell themselves afterward, on their way back to the march? "It's not gay if it's in a three-way"? But yes it is, if all of you are men! And don't the people in the photo below realize that just because they are holding signs affirming their belief in 1 papa and 1 maman doesn't mean that they don't look totally queer for each other? 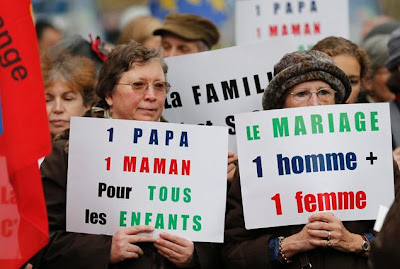 The world makes less and less sense as the years go on, amiright? What's next? A fragrance by Lady Gaga called "Intolerance"? A new single by Elton John with backup vocals by the Westboro Baptist Church choir? Michelle Shocked turning into a weird anti-gay religious nut?
Posted by Tim Anderson at 4:19 PM

Email ThisBlogThis!Share to TwitterShare to FacebookShare to Pinterest
Labels: i'm confused, idiots, the worst, um, what?

Is it me or does "French spring" sound like a sexual position?