The Great "Madonna is a Trannie" Debate Continues (Begins?) 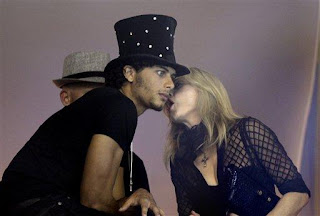 As an important power player in the New York publishing world, I obviously receive the AP's daily email blasts of notable photos that I should know about and perhaps bring up in strategy meetings (catered by Dunkin Donuts and sadness). Not any old person can gain access to these precious images. You have to sign up and create a password!

Anyway, I received the above image of Madonna and boytoy Jesus in my inbox this morning along with a caption that gave voice to an unresolved issue in 21st-century Madonna-ology. It's clear that the overworked monkeys in the AP caption-writing salon have one thing in common with all of us human primates: we just aren't clear on what gender classification to give Madge these days. As Liz Lemon says, Madonna's arms are crazy! She's more man than my boyfriend Jimmy is, and I don't think he would dispute that. (I would let him speak for himself but he's at the beauty parlor getting a weave.) This is why you end up with AP captions like this:

I just can't believe that the Associated Press is suggesting that our Lord Jesus is a gay trannie lover. Sarah Palin's Facebook response in 4, 3, 2, ...
Posted by Tim Anderson at 9:41 PM