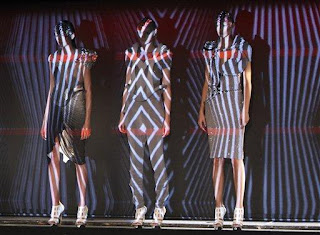 You guys, this is just plain lazy. Manish Arora, a designer from India whose first name is a useful adjective, couldn't even be bothered to put actual patterns on her his new ready-to-wear collection. Instead he just leans back, snorts the last bit of blow off those awesome blow-dipped pretzels they have backstage at all fashion shows, and relies on the Paris fashion people to project something interesting onto the various pieces he has provided them with. So jejune, and I don't use that word lightly. (I've never used that word.)

You know how you're completely devoid of any artistic talent whatsoever and then you go to an art show and you're all like "shit, I could do better than that motherf**king bullshit"? Well, this is kind of the same thing. Just show up at a Paris show with some hobo rags and your best slide projector, find an electrical outlet, and proceed to show the world your best shots of Brazil, Coney Island, or wherever you went last summer, projecting them onto some grandma panties you found in a trash can on the corner of Broadway and Houston. Then voila! You're a designer with vision.

In conclusion, the above photograph is a visual representation of the creative process behind Sarah Palin's new memoir.
Posted by Tim Anderson at 7:24 PM

Email ThisBlogThis!Share to TwitterShare to FacebookShare to Pinterest
Labels: fashion

Jejune. Great word. Must use it more.