Oh Sh*t, They're Coming For Us 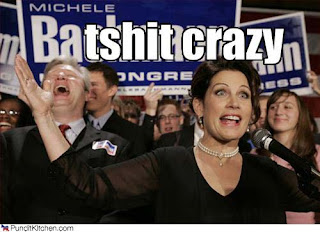 Republican Congresswoman Michelle Bachman of Minnesota is itching for a fight over the new Obama tax plan, and she has a great idea about how to get her followers at Minnesota's better insane asylums to lock and load: appeal to their love of (1) Thomas Jefferson and (2) danger. Here's what she said on some dumb AM radio show today (Hint to younger readers: AM radio is kind of like an iPod that only plays the Angry Jesus podcast. It is also a potent force for right-wing politics and can be live-streamed on most computers with a decent broadband connection):

"I want people in Minnesota armed and dangerous on this issue of the energy tax because we need to fight back. Thomas Jefferson told us 'having a revolution every now and then is a good thing,' and the people -- we the people -- are going to have to fight back hard if we're not going to lose our country. And I think this has the potential of changing the dynamic of freedom forever in the United States."

Sh*t, y'all, they're coming for us. If these hillbillies she's appealing to are half as mad about this energy tax as they are about Obama's fancy-pants pronunciation of Pakistan, we're all well and surely doomed. After all, it's really the small things, like Napoleon or British tea bags, that lead to bloody revolution.
Posted by Tim Anderson at 10:34 PM