Investigative Reporting at its Finest: NY Observer Finds That NBC's Andrea Mitchell is Loved by the Gays 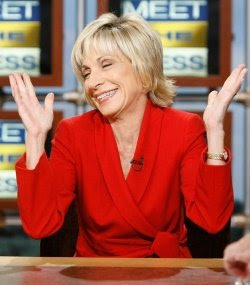 Ye Olde Nellie Queens over at the New York Observer are sure in a tizzy. They're very excited about their new scoop about NBC correspondent Andrea Mitchell and her secret gay appeal, and they don't hold back on any of the unique phraseology so beloved by ALL gays, or at least those from the Old School of Gay Indoctrination. You can't swing a Madonna album without running into the word "sassy," "flawless," "platinum blonde," "diva," "quiche," and "bathhouse."

So the Intrepid Gay's assignment, apparently, is to get to the bottom of the alleged fondness of gay men--as a homogenous group, who all love the same things, obviously--for Ms. Mitchell. He talks to lots of gays who are more than willing to opine on why she fits the mold of a gay icon. Here's an actual quote from one of them, talking about why he friended her on myspace!

“I actually saw her profile on another gay guy’s MySpace and I saw her picture and I was just drawn to it,” he said, as we began salivating. “I can’t say why, but I just instantly added her. I never really heard of her before and I can’t say I really know who she is. I just went for it.”

Gays know these things instinctively--we don't need to be told. It's why Ann Coulter's Neck is also a beloved gay icon. It just seems like it should be.

But why?! WHY? Why is Ms. Mitchell such a furious fag magnet? the Intrepid Gay wants to know. Is it because she's gotten bitchy with Barbara Walters, shacked up with a rich and powerful older man (Alan Greenspan), been plagued with a ginormous nose in a business that rewards facial blandness, or emerged swanlike from the horror of being a brunette in the 80s? We don't find out, but if the Observer had bothered to ask me, I could have easily settled this for them. It is for none of the above reasons that she is a secret gay icon.

It's obviously because she has an indestructible blonde wig with its own missile defense system. And also she's a tranny.
Posted by Tim Anderson at 5:45 PM

I thought of you when I followed this link on Hufpo this morning. I was going to forward but you beat me to it.