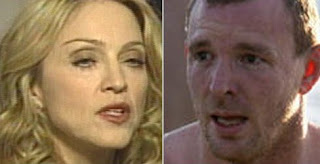 If you're anything like me, you are shocked--shocked!--that Madonna and hunky director of pointless movies Guy Ritchie are splitting. It's just hotly unfathomable, like an Elizabeth Taylor divorce. Who would have predicted this?! Not me, obviously, because I'm not as smart as the New York Post. But apparently the signs of trouble have been out there for a while, what with Madonna's rumored romancing of some soccer player (cricket player? bingo nut?) named A-Rod.

Such big news. But how did it happen? How does a marriage built on such solid foundations as vanity, brutal sex appeal, tons and tons of money and servants, and being British fail? My boyfriend Jimmy and I have none of those advantages, and yet somehow we're still together after 11 years. What gives?

No one person is to blame when a relationship goes south. And it appears that this conventional wisdom is rock solid truth in the case of Madonna and Ritchie. They are both equally to blame, for being twitteringly insane f**king a**holes. Britain's Daily Mail reports that Ritchie told Madonna she looked "like a granny" when dancing on stage with her younger, blacker back-up dancers. Which is kind of true, but you just don't say that!

And Madonna--whew, she is a big piece of crazy pie, according to the same paper. No dairy allowed in the house (but what about your morning coffee? And cheese?!); no television; no sugar; no salt; no sausage!; lots of manic exercising, water drinking, miso soup eating, and "retiring at night slathered in £500-a-pot cream and covered in a plastic body-suit to hold back the signs of ageing."

I think it's the sausage that ultimately did it. If Jimmy tried to take away my sausage I would push him out the window.
Posted by Tim Anderson at 3:07 PM

Email ThisBlogThis!Share to TwitterShare to FacebookShare to Pinterest
Labels: madonna