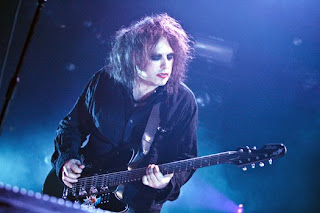 
I know that fat jokes about Robert Smith are passé now, but the fact remains that we really need to address the dizzying downward spiral of every teenage goth’s favorite lovecat. Now, Our Bob has been a little doughy (in a cute way) for a while now. That’s not news. Let’s just say there were probably quite a few Cinnabon stores on Fascination Street, if you get my drift. More than a couple Hot Hot Hot deep-fried Twinkies on his plate, if you follow me. A not-at-all infrequent number of late night trips to the fridge for another slice of that triple chocolate decadence cheesecake with cream and hot fudge that tastes Just Like Heaven, if you—

Anyway, my point is this: getting fat is a part of getting older. I myself plan on porking up as I age, starting later today at Carmine’s Pizzeria on Graham Avenue in Brooklyn. But aging shouldn’t mean looking like a sperm whale in drag. It just shouldn’t. Especially if you’re still up on stage regularly performing songs with titles like “Let’s Go to Bed” and “Never Enough.” How can you expect to be taken seriously wailing at your lover to give it to you “One More Time” if you’re the spitting image of Johnny Sack’s supersized wife Ginny on the Sopranos? 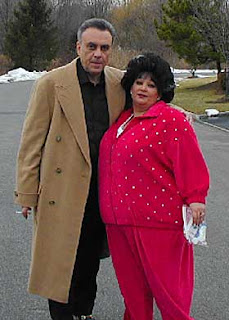 Johnny Sack and Robert Smith after the Cure's recent show in Alexandria, Virginia.
Posted by Tim Anderson at 12:14 PM