New Fun Thing: The Buffalo Beast's List of 50 Most Loathsome People in America, 2008 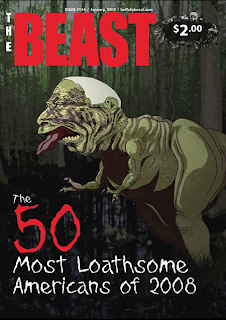 Wow. Who knew Buffalo, New York was so full of sneering merchants of venom? I don't know who these "Buffalo Beast" people are, but they certainly put together the most enjoyable 50 some-odd paragraphs of hilarious vitriol I've read since Gore Vidal's Dreaming War: Blood for Oil and the Cheney-Bush Junta. One of their "Evil Contributors" is Bitch Queen Matt Taibbi of Rolling Stone fame, so that should give you some idea of the treats you have in store here. This is my new favorite publication, and it appears that, in the tradition of Johannes Gutenberg, they actually print a paper version, so one of yous should get me a subscription.

Only misstep: inclusion of John Updike, whom they dub as "apparently immortal." Bad timing, Beast.
Posted by Tim Anderson at 10:56 PM

For 2009, they'll have to save space for the octuplet's mom.

Anonymity? Who's she kidding?