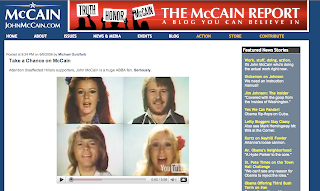 Ancient and endangered polar bear John McCain, the presumptive Republican nominee for President, is shamelessly trying to woo pissed off Hillary supporters by stealing away ABBA—the greatest and best dressed pop band in the history of the world—from the godless liberal Marxists who rightfully own them.

This is beyond the pale. Abba is from Sweden, the land of high taxes, universal healthcare, moral relativism, and government subsidized sequins--in other words, they are liberal and Satanic to their very cores and should not be reduced to appearing on John McCain's Website for the Elderly and Memory Impaired. ABBA are staunch believers in overreaching government, child pornography in schools, and affirmative action--all classic liberal commie Marxist-Leninist hobby horses. In other words, they're better than this.

I encourage my readers to write angry, scathing letters to the McCain campaign and demand that they immediately yank the video from their website and put in its place "Orinoco Flow" by Enya. Hurry up!

Also--Agnetha, Bjorn, Benny, and Frida need to immediately contact their American lawyers and right this wrong. Their legacy is at stake.
Posted by Tim Anderson at 12:35 AM

I am just surprised the geeser knows who Abba are. Someone must have put him up to it. I imagined his campaign song being something from Glen Miller.