Self-Fulfilling Prophecy Dept: Being Gay for Bush Means Never Having to Go to Jail 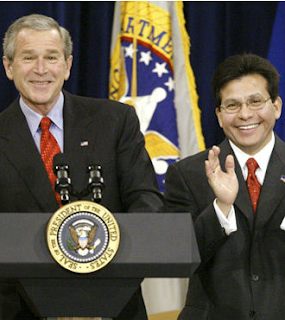 Oh, so this is why it's so important that the Justice Department not be politicized. I guess when you have a hyper-partisan employment policy (sample question: "What is it about George W. Bush's balls that makes you want to lick them?"), with a hyper-partisan Attorney General at the helm, it's possible that justice might could maybe be skewed a little and all of a sudden there could be a huge distinction made between committing a crime and violating the law. It's true. They are such different things! In the words of Attorney General Mukasey, "not every wrong, or even every violation of the law, is a crime." So true. That's from Paul's letter to the Ephesians, right?
Posted by Tim Anderson at 6:23 PM