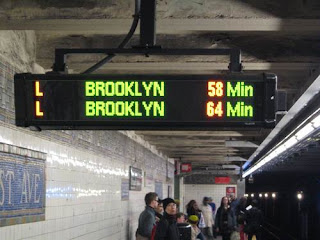 When I read this news yesterday it shocked me to my very core. The L train? Number 1? Is the earth no longer round? Is the moon indeed made of cheese? And, what, is Cindy McCain a living, breathing human being all of a sudden? My two readers might recall that I had a nervous breakdown on the L train a few short months ago and swore to never commute into the city on it ever again ever. I'm proud that I've kept that promise. If I can't ride my bike or my flying inner tube or my inflatable burlap sack with wheels into Chelsea, I opt for the G train to the E. Which is kind of like opting for oatmeal instead of porridge, but, whatever, it's been a good change for me, emotionally.

But, according to the new State of the Subways Report Card, the L train is the most best line in the city. For real. Dig:

The L ranked highest because it performs best in the system on two measures—regularity of service and announcements—and well above average on three other measures: frequency of scheduled service, delays caused by mechanical breakdowns and the percentage of dirty cars.

Um, what? Bitching about the L train is a tradition in these here parts. But does the L—with its snail's pace, its lengthy stops at nearly every station between Graham Ave and 8th Avenue, and, dear Lord, its crowds—in fact represent the best of what the MTA has to offer?

"I'd like to contest these findings," my boyfriend Jimmy just said at a press availability in our living room that no press were able to attend. "They are scurrilous and devoid of even the tiniest trace of provable truth."

Jimmy talks like a criminal defense attorney when he's angry and confused.
Posted by Tim Anderson at 7:24 PM

Ha! I've only been to New York three times, and even I know the L-train sucks. :-)

Thanks for the smile, gaijin. I envy you your time in Japan.