I'm Confused By It 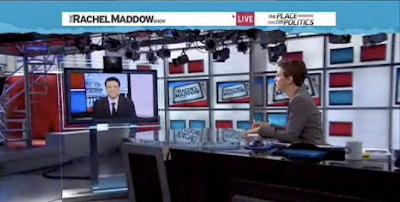 Like all of you, I think that Rachel Maddow is at her funniest when she's not trying to be funny. When she does her little high-concept skits she can be quite tedious and grating (especially if that godawful ginger sidekick is involved), but when she's just reacting to a video of someone like Sharon Angle or Pat Buchanan or Sarah Palin saying something retarded (sorry, Trig) by saying "hmmm" in that high-pitched, incredulous tone, she totally earns her comedy stripes.

But there's something I've been noticing on her show recently that isn't funny "ha ha" but funny weird, and I need to know if I'm supposed to laugh. So Rachel will be doing an interview, like the one shown in the above screengrab with smoking hot Ezra Klein of the Washington Post, and the interviewee will be talking to her from within a teevee screen (beamed in from Tattooine or wherever). Then, there will be a split screen so you can see both of them talking from within teevee screens, like this: 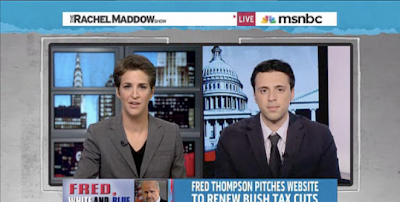 But then there will be a switcheroo and all of a sudden you'll be looking at smokin' hot Ezra or whoever at a desk talking to Rachel, who is now trapped in a teevee screen. I thought Ezra was on Tattooine! 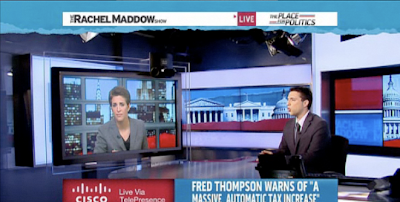 So my question is: wtf? Weird, amiright? Why aren't they sitting in the same room? I never do interviews with someone via television screen when they're just sitting on a stool in my kitchen. Why should Rachel? And this wasn't just a one-off. I saw it last week, too, but at the time I thought maybe I was just seeing things after too many vodka 'n Diet Cherry 7-Ups. But I hadn't had any this morning (well, only one), so this is a real thing. Is it just a new cable news convention that I don't understand, like Sarah Palin being interviewed on Fox about anything?