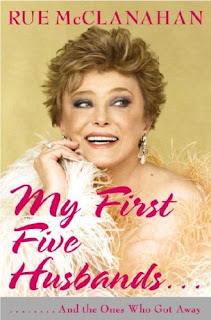 This Golden Girls death trend absolutely must stop because it's getting depressing. Rue was only 76! She did a sex scene in that Sordid Lives cable series just a couple years ago!

But now all we have is memories. I remember when I was just a young boy five years ago and I'd just moved to NYC. I was starting a new job in Chelsea and I had to be there on my first day at 1:30. Tragically, Rue, Betty, and Bea were appearing at Barnes and Nobel on 6th Avenue to sign copies of their recent DVD at 12:30. Not enough time! I decided to go and at least get some photos. But the ladies took their sweet time coming out to the table, and by the time 1:15 rolled around I knew i would have to leave without even getting a glimpse.

But then, like the Angel Gabriel appearing to the Virgin Mary, Rue McClanahan descended from a side entrance and started making her way through the crowd toward me (and toward the back room where Bea and Betty were camped out, probably sipping vodka and insulting each other). My sweaty fingers snapped a few priceless pics as she waltzed through her sea of fans smelling of Mint Juleps and collard greens. After a few quick snaps, I dashed off to work, satisfied that I'd just been within a few feet of the great lady who once uttered the immortal words, "Let's rent an adult video, drink mimosas, and french kiss the pillows!" 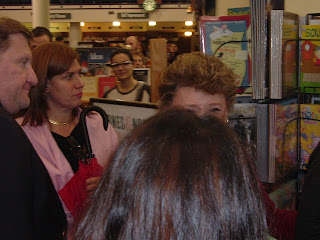 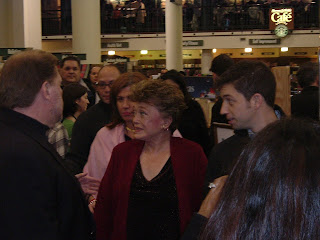 Let's honor our Rue by watching one of her best ever Golden Girls scenes, from the season 1 episode "A Little Romance."

Email ThisBlogThis!Share to TwitterShare to FacebookShare to Pinterest
Labels: been and gone, laydeez i love

What little of golden girls I've seen was so long ago that I can't remember much, but I did grow quite fond of her on Sordid Lives. I kept hoping that there would be another season. It's a shame.

I am so sad! She was my favorite girl!

:( i loved Blanche- what a slut! My mom has Rue's hairstyle. have you ever seen the MOVIE Sordid Lives?