Things We Figured Were True: Scott Brown Will (Eventually, One Day) S*ck a C*ck (If He Hasn't Already) 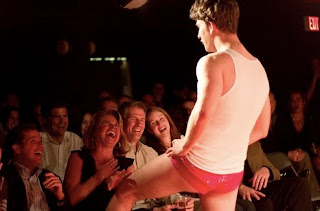 Look at Massachusetts' pretty boy senator Scott "41st Vote Against Whatever" Brown enjoying himself at some tawdry gathering with his wife and friends. Now look at the performer. Now look back at Scott. He. Is. Fascinated. By what he sees. There. In the performer's crotch area. He can't take his eyes off of it. What's so interesting, Scott? Are there tax cuts in those pink shorts?

In conclusion, Scott Brown will be inviting this guy to "campaign" with him in his truck from now until November 2012.
Posted by Tim Anderson at 2:38 AM