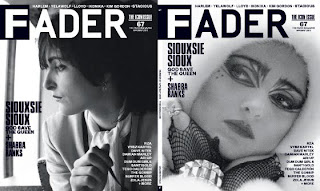 Sadly, I think Siouxsie Sioux may have reached that point in her career where she's celebrated more for what she did than what she does. This has probably been obvious to everyone but me for a good ten years at least but a fan's gotta hold out hope that his fairy godmother—the one who got him through his adolescence with lullabies like "Bring Me the Head of the Preacher Man" and "Rawhead and Bloodybones"—will continue to produce endless slabs of manna for him to feed upon and force his friends to stick in their ears. And, really, she's been churning out the goods for quite a while. After the Banshees broke up in 1996 she put out two more albums with her husband, the drummer Budgie, as The Creatures, and collaborated with Basement Jaxx on a song. Then, after divorcing, she did a great solo album two years ago (her 50th year on the planet) that went virtually ignored in this dumb country. But she's been awfully quite lately. What's a gaywad to do?

I'm REALLY hoping she's planning her next project right now, but it's very possible that I'm staring down the lonely path of a Siouxsie-less future. This is terrible, obviously. This woman could release a recording of herself washing dishes and talking to her cats and I'd buy it. (Why doesn't she just do that?) Thankfully, after stumbling out of a work function the other night where they served me too much booze, I walked past a magazine shop with the latest issue of FADER in the window featuring my #1 lady, which gathers together a few great images of her that I've never seen. It also assembles a bunch of quotes from young musicians giving props to a woman who is a million and 7/8 times cooler than they are.

It also connects the musical dots, via a handy scribbled graph, between Sioux and the other icon the magazine focuses on, dancehall legend Shabba Ranks, which is interesting! Also, it's obnoxious, because Shabba Ranks is one of those Jamaican musicians that hates the gays so much he has to write lyrics about how much he hates them. (Siouxsie loves the gays and would probably have a few choice words for Mr. Ranks should she ever stop kicking him in the face with her gay-ass Catwoman boots. [This is what she does to him in my dreams.])

Come back, Siouxsie! I need at least two more solo albums before you turn 60.
Posted by Tim Anderson at 7:38 PM