Folks, you know when you're hooked up to a bunch of wires at a sleep clinic on a Friday night and there's only one channel available on your room's teevee and that channel is Oxygen and they're playing Steel Magnolias on a loop all night? Heaven, am I right?!

Anyway, it was during the wedding reception scene when Dolly Parton is talking to Olympia Dukakis about an old woman shakin' it tragically on the dance floor that I had a brilliant idea. The ladies were having this interchange:

Dolly: Well, I haven't left the house without lycra on these thighs since I was 14.
Olympia: You were raised right.

It was at that very moment that I thought: I wanna make cheese straws tomorrow!

Now, I worked at a bakery in north Raleigh when I was 16 called The Coterie that had the best dang cheese straws I've ever put in my mouth--and I've put a LOT of cheese straws in my mouth. I don't know what it was about them and I never was able to get a gander at the recipe we used, but if time machines existed the very first thing I would do would be to troll on down Leadmine Road to Greystone Village and get a cheese straw specimen so I could recreate them in the here and now.

I've tried to make them before and have had a small degree of success. The last batch I made were more like small cheese scones, but they were ok. But this time I really wanted to go for it. Make 'em real cheesy and biscuit-like. I searched for good recipes on the internet and couldn't find anything decent and then I thought, hey, I have Amy Sedaris's cookbook. Surely she'll have something retarded in there.

Sure enough, she has a cheese puff recipe. But it called for swiss cheese, which is lame. I wanted to use sharp cheddar. So I made some adjustments to the recipe and ended up with the most succulent, mouthwatering, and buttery batch of cheese biscuit thingies I've had since the Coterie days. They still weren't up to the Coterie's standards, but they were a close second or fourth. Hey, here they are: 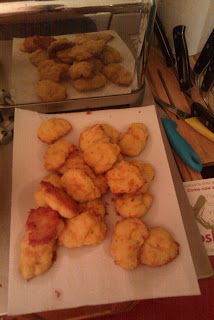 While I was at the store buying the cheese I decided, hell, why not go ahead and make a pie? So I decided to make another one of my famous Hershey Bar Pies, which are so easy to make and which are better than they sound, so shut up with your dismissive judgments. You just mix two giant melted Hershey bars with a thing of Cool Whip in a bowl, add some nuts or something, pour it into a pie crust (make sure you cook the pie crust, dummy), and then put it in the freezer. When the pie has set, top it with some more Cool Whip and then maybe some chopped nuts and/or crumbled Heath Bar or Peanut Butter Cups or some shit. Then have a photo shoot: 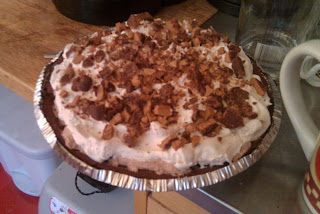 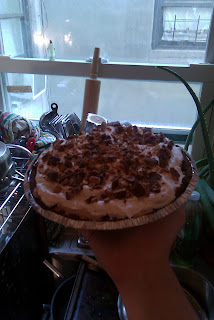 Don't forget a close-up with a slice cut out so you can see the delicious gooey insides. 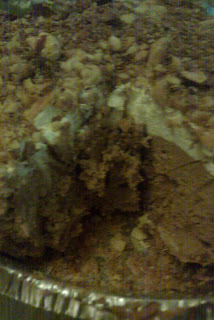 Then check your blood sugar, have your insulin pen ready, and maybe even plan a bike ride for later. Those blood sugar levels aren't gonna come down to acceptable levels by themselves!
Posted by Tim Anderson at 5:34 PM

cheese straws? i don't know if they are technically straws...but DAMN they do look gooood...so does the pie. when are you gonna make me one?

I love you, I really do, but you ARE a bad diabetic.

I do love that you make cheese straws, though. That's just adorable.

Um, how many times have you been to my house? For, you know, PARTIES? And none of these skillz have come up before? What the WHAT!

well, i wouldn't call them skillz. maybe modest abilitiez? i'd be happy to make pie 'n cheese thingamies (or whatever) next time! Usually when i come Sam is the queen of the kitchen and i can't measure up to that. (what can i say, i'm shy.)

i just keep thinking of all that counter space...

Oh sure, mock my lack of counter space. Just stab me in the heart with a cheez straw, whydoncha??

WRONG, HP Wood, WRONG!!! (This is funny.) I was actually envying your counter space. You have a wonderland of formica (or whatever) in your place compared to the sorry excuse for counter space we have. Plus, I was counting your kitchen table as counter space, because we don't have one of those.

Srsly, I'll send you a picture of our (self-supplied, from B B and Beyond) counter. It's laughable.

Will you PLEASE whip me up one o' them pies, Timmy? Please please?