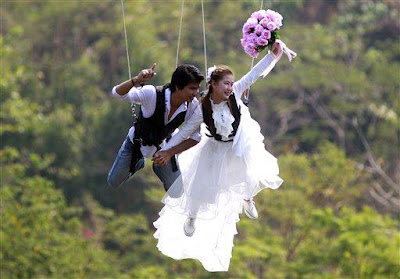 So this is what the world o' marriage is coming to. For centuries human civilization has defined marriage as one man-one woman, on the ground. Now all of a sudden folks who are too good for the terra firma our mighty God provided for them want to subvert the dominant gravitational paradigm or whatever and get married in the air, where the laws of man can't reach them. But the laws of man come from God, and God can reach them no matter how high up in the air their devil's magic takes them.

I mean, what's next? A man on a flying motorcycle marrying a penguin on a porpoise? It could happen! It is our job as strict constructionists to feverishly regulate behavior that the Constitution doesn't say anything about, because that's what the Founding Fathers would have wanted, according to the Glenn Beck program. Because what—besides gravity, God, and our faith in our most important and unchanging institutions—is keeping us all from hurling into space and crashing-landing at the event-horizon wedding of a cross-dressing Martian and his bride, a black hole?

Gravity-based marriage, that's what.
Posted by Tim Anderson at 3:40 PM