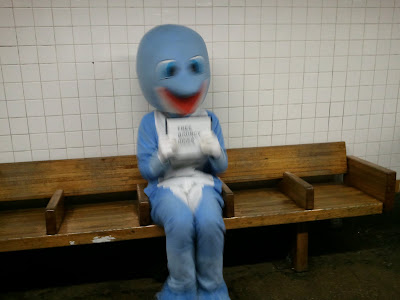 Ah, the Lorimer L Subway Station--it's where things happen. You know how you're getting really f-ing tired of riding the subway every day but you've been forced to leave your tricycle at home and spelunk down to the L train for the past few weeks because of the snow-smothered streets? Well, sometimes being forced to ride in a diseased underground aluminum can with a slew of other human sardines allows you to witness poetry in motion upon alighting at your destination. To wit: this random blue furry bouncing around on a bench and startling me as I looked up from my Philip K. Dick book that features a book that tells the future and which probably foretold the arrival of a bouncy blue furry but I missed it. (Also the cover is blue... Coincidence?!). This furry held a sign saying "Free Bouncy Rides," naturally, but unfortunately he wouldn't stop bouncing long enough for me to get a decent picture.

So did anyone take him up on his offer? To bounce? And ride?

Not to my knowledge. But I haven't finished the book yet, so who knows? 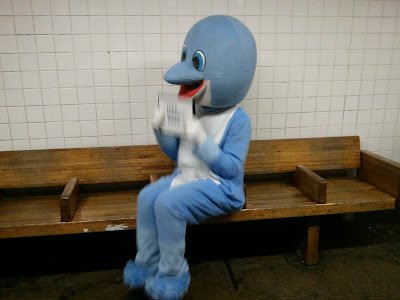 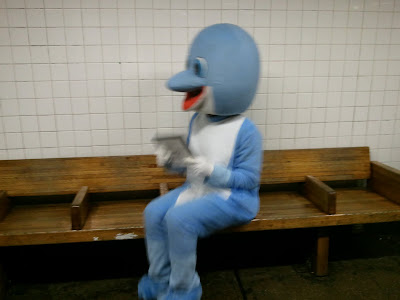 Hilarious. The Depends diaper over the costume is what sends it over the edge.

If this person's intention was to make people laugh, smile, giggle or otherwise forget the white death for a few seconds, I think I would consider them a huge success!

You should have taken a "Bouncy Ride" for the sake of research.