This Trannie Should Be New York's Next Governor, Obviously 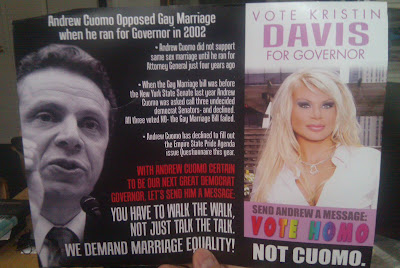 Kristin Davis is not messing around in her direct mail pieces, not at all. You may recall I received this one on Monday and I fell in love with it for its glamour and pizzaz. Well, the one I got yesterday is even more gay, if you can believe it. And I don't just mean esthetically. I mean Lady Davis calls out Andrew Cuomo for being limp on gay marriage. And she uses the word "homo" in her tagline:

And she prints the word "homo" in rainbow colors, yay!

In any case, if Kristin Davis doesn't become New York's next ex-governor, she should AT THE VERY LEAST be given her own variety show at LipsNYC and her own talk show on Bravo.
Posted by Tim Anderson at 4:34 PM

Email ThisBlogThis!Share to TwitterShare to FacebookShare to Pinterest
Labels: trannies