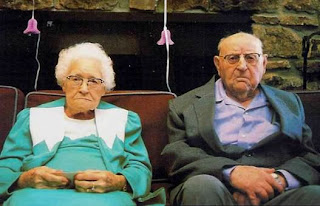 Hey kids, have your parents forwarded you any emails in the past few days about how the new health care bill has a hidden euthanasia clause that will allow the federal government to line up all senior citizens over the age of 70 and force them to justify their decrepit old existences to Dear Leader Obama before being shot point blank in a televised bloodbath/ObamaCare fundraiser live on NBC? Mine have!

Yes, I got the ALL CAPS HYSTERICAL EMAIL FROM MY MOTHER SAYING THAT THIS IS TRUE AND IT'S WHAT'S GOING TO HAPPEN IF THIS BILL PASSES AND THE TRUTH NEEDS TO GET OUT OR OUR COUNTRY WILL BE DESTROYED AND WHAT DOES THIS MEAN FOR YOUR DAD AND HIS ALZHEIMERS?!!!!!

To which I of course responded, "So, how about that Sarah Palin?"

It reminded me of how exhausting it was last fall making sure every day that my mother wasn't dipping her toe into the Obama-is-a-half-breed-Muslin-and-Michelle-is-Angela-Davis crazypool again. So many visits to Snopes. So many forwarded articles debunking whatever shitbag of a story was being thrown against the wall that day. So many impassioned emails. And she still voted for McCain.

And now we have the Republicans on record saying that the Democratic health care bill will kill senior citizens because of a clause requiring MediCare to cover “end-of-life consultations” once every five years, more often if they have a life threatening illness. Per Talking Points Memo, "[t]hese consultations include 'an explanation by the practitioner of the continuum of end-of-life services and supports available, including palliative care and hospice, and benefits for such services and supports that are available under this title.'"

So for all of yous who aren't up-to-date with all the new math:

Thankfully all of this will be fixed when Obama finally produces his birth certificate and clears everything up.
Posted by Tim Anderson at 8:48 PM