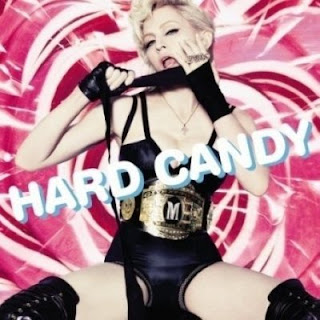 As all you homosexuals out there surely know, Madonna's crotch's new album Hard Candy is coming out this week, which is why all across NYC rainbow flags have been flying at half mast. It's certainly a time to celebrate. I mean, Madonna's crotch is 50 years old now, and it's STILL starved for attention. Just like you and I will be when we're 50. (In other words, Madonna's crotch is just like us!)

You would think that after all these years Madonna's crotch--surely the hardest working crotch in the business-- would be tired and ready to retire to the south of France, but it appears the party is just getting started. I mean, look at the cover of this album. So much pink. So much. Think of all that Madonna's crotch has been through over the years--Sean Penn, Warren Beatty, Sandra Bernhard's mouth, Lourdes and Rocko, not to mention fierce competition from the younger generation of proud vag flashers like Britney and that Lohan girl--and it's still clamoring for its close-up. Well, thankfully it's time for another album, because the crotch wants out of the house.