Scenes of Our Lives: Notes on a Scandal 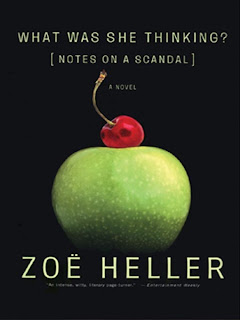 This movie was based on the novel What Was She Thinking? Notes on a Scandal by Zoe Heller, which you should read immediately. I didn't read it until after seeing the movie and becoming obsessed with it (I've always been a sucker for movies about bitter old women. See also: Tatie Danielle). The book and the movie are different from each other in several significant ways, but both are dark, dreary, depressing, and fun as hell.

In this scene, Judi Dench's Barbara Covet (great name!), who has developed an irrational obsession with a fellow teacher of hers, Sheba Hart (Cate Blanchette), and has convinced herself that they are special friends (with all the lesbian possibilities that that implies), is confronted by Sheba after Sheba discovers Barbara's diary and reads it. Sheba, who is hiding out in Barbara's apartment because she's just been found out to be screwing around with one of her high school students (an affair that Barbara knew about and used to her advantage), is going slightly mad, as the Siouxsie eye make-up indicates.

This scene has everything you could ever want in five minutes of cinema: a panda-eyed blonde tearing apart an apartment, a cougar fight between the two scenery-chewing female leads, a reference to Virginia Woolf, someone being called a "bitter old virgin," the British paparazzi, and a bleary-eyed pathos. We're talking Joan Crawford vs. Bette Davis territory. (By the way, this blog post is totally gay.)

Email ThisBlogThis!Share to TwitterShare to FacebookShare to Pinterest
Labels: scenes