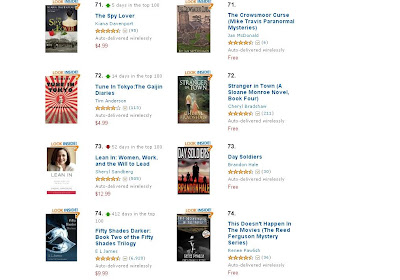 The point is, TiT was featured in some local deals Kindle promotion yesterday and was discounted to 99 cents. And, as always happens in nature when things are deeply discounted, TiT shot up the Amazon Kindle chart, where it had been languishing at like number a million. (Actually, it's been fluctuating between #30,000 and #70,000 for the past few months.) Last night it reached #69, which I think you'll agree is the most perfect position for it. Sadly, I forgot to take a screen grab of it, so I'm having to settle for this one, where I'm #72, in front of both Sheryl Sandberg's book and the Fifty Shades of Grey filth. Leaning in!
Posted by Tim Anderson at 3:10 PM

And it was worth every penny! I hope you're still together with that nice boy- you seemed so perfect together. :)

That is so awesome!