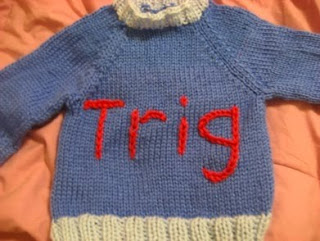 Poor Trig. His mother's not getting enough attention this week. Maybe she needs a bottle?

As you have probably heard, Trig Palin's mother, who used to be a governor or something and who now does Facebook posts for a living, recently did a Facebook post calling on President Obama to fire his chief of staff Rahm Emanuel because Rahm--our favorite potty-mouthed silver fox at the White House--called liberals who are determined to primary Blue Dog Democrats "fucking retarded." Momma is outraged that Rahm would utter such a deliberate slur against her son.

Now, Trig Palin's mother's son Trig has Downs Syndrome and, bless his heart, now he has to go through the indignity of seeing his own mother make a comparison between Rahm's put-down and his good self. But why does she automatically think that the metaphorical use of the word "retarded" to describe Democrats has anything to do with her son? She must think he's a retard. (Or a Democrat?)

Rahm has now apologized for the comment, but Trig's mother ain't done. In her next Facebook post, which will be typed by Willow once she sobers up, Trig Palin's mother will demand that David Axelrod resign as chief advisor because of that time in high school when he called a girl a slut, which is obviously a dig at her daughter Bristol.
Posted by Tim Anderson at 12:59 AM